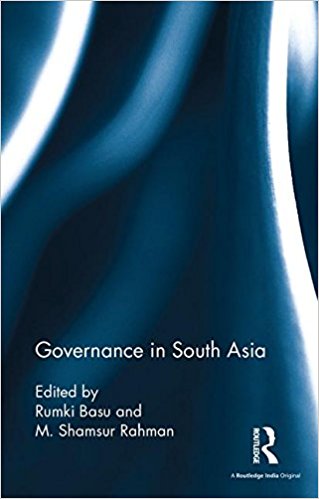 As a new imagery South Asia straddles the two competing conceptions of her own particularity, one as an invented abstraction, perhaps more theoretical and nomothetic, and the other as an existing reality, quite empirical and ideographic. As an abstraction it seamlessly weaves herself into a Wallersteinian classic of ‘sub-periphery’ situated in the global to catch up with the core, and as a concrete reality assiduously struggling to experiment the democratic project by some sort of venial state and a truncated civil society. It is in the latter that the policy and issues of governance gains salience and, thus, the need to study culture-specific standards of governance, developmental experiments and micro-politics. A careful sifting of South Asian experience, in order to interpret the development of policy and governance trajectories would enhance and sharpen and also render a more complex and variegated focus on her (un)common heritage.

Any attempt to understand governance in a specific local setting, in this case South Asia, would necessarily involve the contingency of its genealogy. The nineteenth century understanding of the state with its associated fiction of popular will has given way to ‘new politics’ in the contemporary times, where structural bureaucracy, professional expertise, and procedural accountability is replaced by markets and networks, rational choice theory and network institutionalism, and performance accountability. The reforms narrative modifies the notion of good governance by pushing new policy instruments, such as network management, public-private partnerships, regulation, performance measurement, and somehow skips the reimagining of new democratic ideals. However, the resurgence of democratic impulse and its sustainability, particularly in South Asia, depend on participatory and dialogic innovations that give citizens a direct role in the policy process. Today, therefore, more emphasis might fall on dialogue, community participation and organizational pluralism.