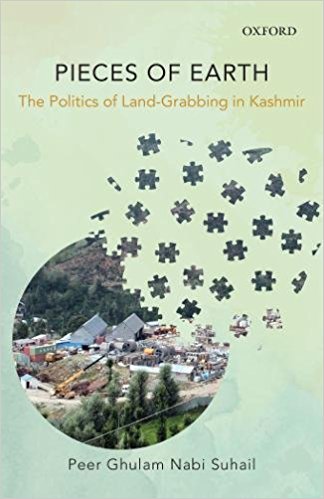 One of the protracted conflicts of present times, involving three nuclear powered states, is in the disputed region of Jammu and Kashmir. Both India and Pakistan claim it as part of their larger territorial ambitions and national imaginations. Thus the national projects that assume the task of incorporating the territory do not only rely on explicit political aspects but other subtle, more ideologically driven, aspects negotiate such projects. Pieces of Earth engages with one such aspect i.e., the role capital plays in such projects. It is an effort to understand the links between capital, state and people in a conflict zone and how capital, taking help from the institutions of the state, penetrates inside the homes of the common people without the fallouts that are normally associated with such tasks.

Using multiple methods and approaches of research ranging from ethnography to political sociology to historical and finally to political economy, the book unravels the biggest fears that have emerged in recent years in the Kashmiri narrative vis-à-vis the Indian state. This fear emanates from the perception that an Israeli type of settlement and policy is being enforced in Kashmir. Closely looking at the patterns of land grabbing/acquisition in Kashmir, this book creates an impression that such activities especially in a conflict zone unsettles the local population and re-ignites the notion that the state is at war with them especially when the human cost is already high (due to an insurgency).

The main focus of this book is the ‘land grab’ and ‘water grab’ by the capital through the National Hydroelectric Power Corporation (NHPC) with the support of the government in the disputed region of Kashmir. The book starts with the Indus Water Treaty, an arrangement between India and Pakistan on water sharing. Despite serious political differences and many wars between the two countries the Treaty has managed to survive. However, Suhail argues that the Treaty has ignored the interests of Kashmir at the cost of India and Pakistan despite water flowing through its territory.