The Text and The Context Of Literarization 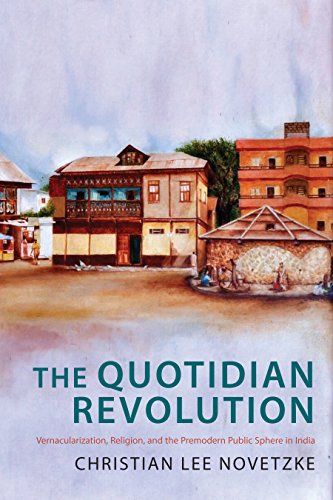 The Text and The Context Of Literarization
Vikas Rathee
The Quotidian Revolution: Vernacularization, Religion And Premodern Public Sphere In India by By Christian Lee Novetzke Permanent Black (in association with Ashoka University), Ranikhet, 2018, 402 pp., price not stated
May 2018, volume 42, No 5

The Quotidian Revolution is an effort at delineating and illuminating the moment in Indian history when literary writings became manifest in vernacular languages. The book addresses the particular case of the literarization of Marathi in the thirteenth century. The ‘text’ and ‘context’ of this study are the wider social backgrounds in which the Jnanesvari (c. 1290), now renowned as the oldest literary text in Marathi, and the Lilacaritra (c. 1278) were composed. In this endeavour the reader is taken through a journey with stops at various points of related interest.

As a description of the process of the early written and literary forms of Marathi and the milieu in which this took place Novetzke’s book is a welcome addition to the bookshelf. It is cogent, well-written and nuanced.

Novetzke sees the rise of Marathi literary culture as an expression of the wider movements in politics, public culture and everyday life. At the time when Marathi became the preferred vehicle of the written word in the region, there was a shift from a ritualized culture and hierarchical polity, towards a culture that valued quotidian or everyday issues and social justice. The chapters of the book tell us how this process unravelled. Part 1 of the book outlines the relevant aspects of history of Maharashtra before the process of vernacularization got underway. It focuses on the century long (1187-1317) rule of the Yadava dynasty when Marathi appeared as a literary language. The book does not provide much data pertaining to the situation of Sanskrit literature in Maharashtra prior to the rise of Marathi. Chapter 2 revolves around the use of Sanskrit and Marathi in the inscriptions of Maharashtra. In the earlier part of their rule, the Yadavas used Sanskrit and Kannada as the language of inscriptions followed by Marathi. With time, the use of Marathi became more common including through bilingual inscriptions in Sanskrit and Marathi. These bilingual inscriptions often included colourful curses (gadhegaal) invariably expressed in Marathi. One standard Marathi curse went: jo lopi tehachiye maaye gadhau jhaave (trans., anyone who contravenes this donation, a donkey will f*** his mother). In saying that the Yadava polity used Marathi in its inscriptions for ‘threatening and cajoling the general population’ (p. 85), the author draws a far-fetched conclusion. There is an over-emphasis on the value of inscriptions as public texts whose message is supposed to be socially disseminated. Some inscriptions are meant to be publicly visible but others are not. Despite offering some contrary evidence, the book also claims that early literary practitioners of Marathi stayed away from political patronage as a matter of principle (p. 90). However, the larger argument of the book holds despite these minor over-statements. The book rightly admits the possibility of the existence of Marathi oral literature prior to the thirteenth century. Chapter 3 provides the reader with life sketches of Chakradhar, the author of the Lilacaritra, and Jnandev, who composed the Jnanesvari, and highlights that the ‘real’ and ‘remembered’ lives of saints can be very different, and very difficult to peel apart.