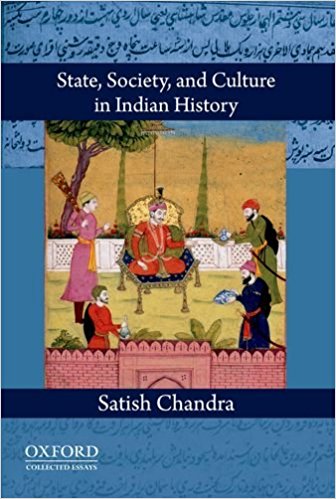 Most of the essays in the volume under review were written by Professor Satish Chandra in the last ten years and published in various journals and were, as the author himself admits,’often difficult to locate’. Their compilation and publication in a single volume by Oxford University Press is, therefore, significant. The essays are categorized under three sections—Social change, the Mughals, and Cultural Traditions. The first section explores social changes that occurred in medieval India, particularly the evolution of composite culture and its historical journey into secular India. The second section dwells upon the historiography of Akbar’s reign and a number of other historical figures such as Jodha Bai, Rana Pratap and Shivaji. In addition, it provides a fresh look on jagirdari crisis and agrarian system of Mughal India as well as Aurangzeb’s policies. The last section of the book discusses some’neglected aspects’ of social and cultural traditions and also draws attention to the efficacy of certain literary works in throwing light on these aspects. The short articles in this section are published for the first time and are, therefore, more interesting.
That the Indian villages were diverse and dynamic in structure and functioning is now a well accepted fact. Chandra argues that significant changes in the rural structure began from the end of the thirteenth century when the state became powerful enough to interfere in village society. Rural society revolved around the triad of state or its representative zamindars and peasants. During the fourteenth century many of the intermediaries began to be replaced by khiraji zamindars who assessed revenue for the state and thus forged direct relations between the state and the cultivators. The agrarian policies initiated and developed by Alauddin Khalji, Muhammad bin Tughlaq and Firoz Shah Tughlaq thus had a concrete impact on the village society.