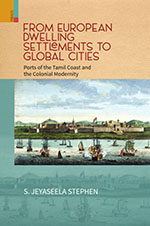 The Tamil country has a long history of being a part of the larger world of maritime trade in the Indian Ocean region, with its trade links extending even up to Rome in the ancient period. The coastline was thus dotted with ports which were essential links between the hinterland and the external world. Whereas the patterns of trade remained remarkably stable over the centuries, the scenario with regard to the ports and their relative prosperity and significance was much more variable, due largely to changing political conditions. In the sixteenth century, when the Europeans first began to establish themselves on the Coromandel Coast; Pulicat, San Thome (Mylapore), Devanampattinam (Cuddalore under the English), Porto Novo (Parangipettai), Nagapattinam and Tuticorin (Thoothukudi) were important ports for the kingdoms in the hinterland, ranging from Golkonda in the Deccan, to Gingee, Tanjavur and Madurai.

Stephen’s book gives a detailed account of each of these ports after the advent of various European nations. The Europeans, starting with the Portuguese, wanted a foothold in these port towns to strengthen their position and exercise monopoly control over the trade by acquiring territorial authority, until ultimately the English established themselves as the sole power over the entire coast, with the exception of Pondicherry. The pattern followed by all the Europeans remained essentially the same. They negotiated with the local authorities and the rulers to get tax concessions for their trade, along with limited rights to collect taxes or duties from the local traders.They could control the sea-borne trade because of their naval superiority through issuing passes to the local ships. In general, the land-centred kingdoms in the South were not overly concerned about allowing the Europeans the right to physically control the port towns, even extending to a few miles inland. Since their power and authority were always tenuous and vulnerable to attacks, the Europeans fortified their settlements by constructing forts to protect themselves and their trade.