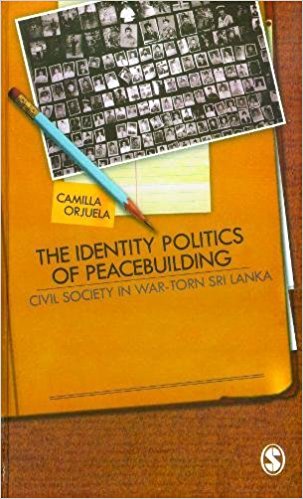 Reading any book on Sri Lanka at this critical juncture in Sri Lankan history is like preparing oneself for an account of history that is fast getting dated and passé. In moments like this, when things are happening at breakneck speed, disproving earlier analyses, it is nonetheless important to have a relook at the markers set earlier, at the hypotheses and postulations offered by various analysts, see why they were proved or disproved and re-assess the conflict dynamics from a fresh perspective. In this context, Camilla Orjuela’s work initiates the reader into the relatively less explored terrain confined to the role of civil society in the conflict in Sri Lanka. As a western scholar having genuine interest in the protracted ethnic conflict in Sri Lanka, Ms Orjuela has spent more than a decade researching on the role of identity politics and civil society in peace and conflict in Sri Lanka.

Her doctoral dissertation submitted in 2004 was on ‘Civil Society in Civil War: Peace Work and Identity Politics in Sri Lanka’. The emphasis on ‘civil society’s role’, which is the main thrust of her thesis, is shifted to ‘identity politics of peace building’ in the book.

The conflict in Sri Lanka has been over-analysed as an identity-based conflict born inevitably out of a conscious policy of privileging a numerically dominant ethnic group over a rather prosperous minority over a period of time. The discriminatory policies of the Sinhalese majority Sri Lankan state that led to ethnic polarization and finally to violence have been well chronicled by many authors and Orjuela liberally feeds on these accounts and analyses. What distinguishes her account from others is her arguement that such accounts of ethnic discord hide other manifest divisions within the two principal ethnic groups in Sri Lanka which projects the situation as less problematic than it really is. She refers to divisions amongst the Sinhalese and the Tamils on the basis of gender, class, region and even ideological and religious persuasions and argues that they had better not be steamrolled as unimportant and inconsequential.