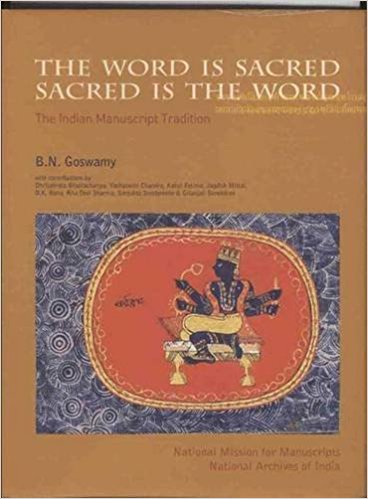 The Word is Sacred is a catalogue for an exhibition on Indian manuscripts that was part of the Frankfurt Book Fair last year, where India was the guest of honour. The exhibition itself was organized through collaboration amongst a number of institutions and individuals, under the aegis of the National Mission for Manuscripts. Professor B.N. Goswamy, who coordinated the entire exercise, provides a lucid, accessible introduction to both the exhibition and the more complicated histories of manuscript traditions in the subcontinent. This includes a discussion on the range of writing materials, the ways in which they were prepared, techniques of writing, and the variety of instruments used for the purpose. While this documentation is valuable, there are explanatory devices that are invoked in a somewhat unproblematic fashion. We read, for instance, that: The coming of Islam into India, and the real threat posed by it to all early traditions, whether Hindu, Jain or Buddhist—to which it was opposed, gave further fillip to the process: more and more texts, and in larger and larger numbers, began to be committed to palm leaf … (p.51).

This glosses over the complex relationships amongst these traditions—the fact that Jaina and Buddhist traditions were often viewed as oppositional from the perspective of Vaishnavism and Shaivism, and that rulers who professed Islam also patronized projects of translation of Brahmanical texts into Persian.