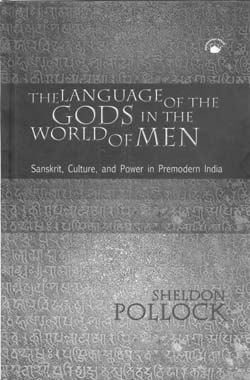 Retrieving Hidden Jewels of the Sanskrit Deep
Arjun Mahey
THE LANGUAGE OF THE GODS IN THE WORLD OF MEN: SANSKRIT, CULTURE AND POWER IN PREMODERN INDIA by Sheldon Pollock Permanent Black, 2007, 684 pp., 895
March 2007, volume 31, No 3

The foundation of empire is art and science. Remove them or degrade them, and the empire is no more. Empire follows art and not vice versa… (William Blake)

In the great books of India, an empire spoke to us… (Emerson)

In 1988, the then newly inducted Bobrinskoy Professor at the University of Chicago, Sheldon Pollock, delivered a short, inaugural talk on Sanskrit with the arresting and promising title, ‘The Language of the Gods in the World of Men’. It was a lively academic exercise—the audience was non-specialist—but it catalogued, quietly and forcefully, a preliminary number of the more important desiderata that have riddled Sanskrit studies over the decades. More quietly still, it seemed to convey a covert pledge: of more substantive explorations (in the future) of some of these baffling obscurities in the study of ancient India.

In the event, this did not happen. Pollock went on over the years to demonstrate, instead, a Parasurama-like prowess in the systematic slaughter of the sacred cows of Indology. Through that powerful interrogative mechanism, the academic monograph, he questioned the authority of established Indological truths and posited some alternatives of his own: that India was not ahistorical in its self-image: the early mimamsikas had intentionally crafted and naturalized the image of an unchanging India; that the past had produced an ethnology analogous to biogenetic determinism; that the Ramayana had no interpolations apropos of Hermann Jacobi’s suggestion that the beginning and end of the text were tacked on postscriptum; that Sanskrit inscriptions and political texts, hitherto ignored, made feasible the reconstruction of a hitherto invisible civilizational cosmopolitanism;