Between Romanticism and Reality 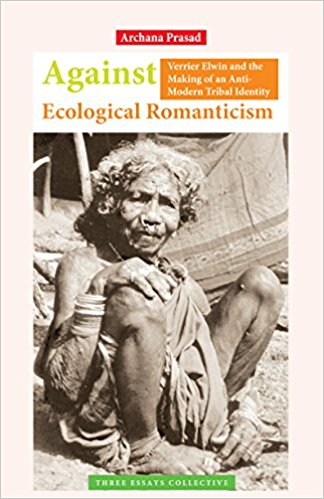 The author argues that two significant aspects Elwin’s advocacy of protectionism for tribal people have contributed to the construction of an anti-modern tribal identity. First it was based on an ecological romanticism that glorified the past and held that “tribal people had been living in harmony with nature since ancient times (p xv)…. That tribal practices were ecologically friendly (p xiv) and they were of the view that “the past had been better than the present, that there had truly been a Golden age when their kings lived (p. xv). This she points out is clearly demonstrated in the case of the Baigas who’s “yearning for bewar (shifting cultivation) swaraj was a desire to get back their Golden Age (p. 36)”. This she argues was the “cornerstone of the romantic challenge to modernity (p. xv)”. It was grounded in the defence of custom and tradition and saw these as alternatives to a modern way of life (p xiv) From her study of historical records she tries to show that this view is problematic (ch. 2). Second, Elwin argued that the tribal people should be given place and protection in the Hindu social structure (p. xvi). This she point’s out paved the way for Hindutava forces (ch. 3) to claim tribal peoples to be a part of the Hindu fold and wage a battle against the missionaries.

Further she suggests that “movements such as Narmada Bachao Andolan, Ekta Parishad, Kisan Sangathan and many others are facing difficulties in sustaining the momentum of their mobilization (p. 107)” on account of  “their use of the notion of tradition and customary rights in resistance to the modern development… an idea that is informed more by contemporary political and cultural politics than a realistic view of history…. Their critique of the current model of modernity is valid in certain respects: all secular and democratic forces agree that resource appropriation under capitalism is detrimental to the cause of marginalized people (p. 108)”.

In order to look beyond ecological romanticism she suggests there is “a need to develop a sustainable modernity that …helps to rejuvenate and upgrade local practices. The granting of legitimate rights to people over their resources is one aspect of this effort: the use of modern tools to create egalitarian relations of production is the other pillar (p. 108)”. To be able to workout this framework it is important “to negotiate with the current paradigm of modern development…to meet the expectations of the people”. In this regard the question “what type of modernity, and for whom?” needs to be asked. This she says the “theoreticians of ecological romanticism are clearly unable to answer (p.108)”.

There is agreement with the author on the need to be realistic and be freed from the belief in the Golden Age. However, her reading of Elwin seems not to take into account the historical and social context in which he was working. Certainly one does not go all along with him in way he describes tribal life. The empirical correctness of his descriptions could not have been better. His concern was really with the spirit of the people than anthropological accuracy. It must nevertheless be recognized that his appreciation of the tribal way of life was a progressive step in a historical context where tribal people were being condemned as ‘other cultures’. This was not without political significance, for not only did it draw attention to the fact that the so-called ‘primitive’ societies were comparable to modern societies, it also strengthened the legitimacy of the colonial governance one aspect of which was structured in accordance with Warren Hastings cultural policy namely, a critical appreciation of the lives of people governed. Elwin’s shortcoming was that he did take into account significance of tribal movements. This makes his view shortsighted and not romantic.

Romanticism is not the overlooking of objective conditions of existence. To the contrary romanticism attempts to free the thinking process of the burden of facts enabling an imaginative leap to bring out possibilities for the future embedded in the objective conditions. It is an attribute of theoretical thinking which can free the mind from slavery to the volume of facts, from a serfdom of the bureaucratic modes of thought and access several layers of historical truth that define an entities being in the world. It can be reached with the romanticist’s imaginative flights and dives. Without it the mind is caught in the fetish of facts in a manner comparable to Sisyphus’s labor to continuously roll the boulder up the hill each time it has rolled down.

Seen from the standpoint of tribal peoples culture and way of life, an instance of this fetish is the objectivism of dominant mainstream (which includes the secular Left and the Center and the Hindu right) that sees the tribal people (when they are still forest dwellers) as the ‘other’- described as ‘primitive communism’ by the secular left, as ‘in the state of nature’ by the liberal center and as ‘outcastes’ by the right.

The author stresses the “need to develop a sustainable modernity… which helps to rejuvenate and upgrade local practices”.  This cannot be done so long as the equation, ‘the romantic is unreal’ and the  “notion of tradition and customary rights in resistance to the modern development is based on a belief in a Golden Age” continue to define thinking in this field.  She is of the view that this idea of the golden age is formed more by contemporary political and cultural politics than a realistic view of history. Is this true? A look at the beginnings of British presence in India shows that the notion of golden age came to us through the Bengal renaissance. As I see it, the first equation articulates a generalized cynicism towards tradition, which is the other extreme of complete faith in it articulated by the notion of golden age. Both undermine freedom for they create conditions where self-determination of one is terror for the other.

The judgment that environmental movements are “facing difficulties in sustaining the momentum of their mobilization, as their attempts to develop viable strategies of resistance and development alternatives continues to be informed, at least in theory, by a negation of the idea of modernity (p. 108)” is hasty.

Is there a difficulty in mobilization? Do the movements negate the idea of modernity?  Perhaps what the movements are saying is that the notion of modernity needs to be freed from the colonial mind set. Modernity need not be defined in contrast and opposition to traditional.  Not all aspects of modernity are just and progressive and neither are all customary practices unjust. Modernity is a tradition, which concerned with questions of freedom and justice. There are several cultural traditions that are equally concerned with these questions.

It is important to recognize that tribal people have been able to discover through their cultural practices, the medicinal properties of plants without the equipments of modern science. What can we learn from them?

Did Elwin pave the way for the Hnidutva forces to claim tribal people to the Hindu fold? Is it not true that all along pre British history of India the Hindus have treated the tribal people as outcasts and have time and again made them as part of the caste social structure?

Savyasaachi is a Reader in the Department of Sociology, Jamia Milia Islamia, New Delhi.