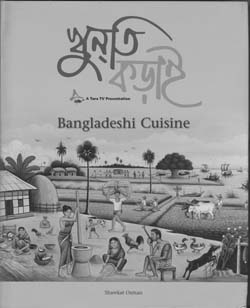 The Bengali likes to sport an intellectual air, which in no way detracts from his deep and abiding interest in things culinary. And the gourmet in him demands that the dishes are properly sequenced, starting with bitter gourd (karela) or even neem leaves cooked with brinjal, depending on the season, followed by a staggering procession of vegetables, fried or in curried form, fish, prawn and meat. Unlike the denizens of West Bengal, the Bangladeshi prefers to have his dal at this stage, concluding with milk based sweets and yoghurt. Rice, of course, remains a constant factor. Bringing out the delicate flavours, be it that of vegetables, fish or meat, requires a great deal of skill and patience. Bengali cuisine is an evolved art that is understandably becoming rare in twin-job households.

Though one must hasten to gratefully add that many ladies do retain the art. Men, too, as Shawkat Osman proves. Fortunately, over the past few years restaurants have grown in numbers in West Bengal, some in Dhaka as well, where the genuine taste of Bengali food can also be savoured.

Shawkat Osman did a series of cookery programmes on TARA BANGLA television, from which has emerged ‘khunti-kadai’ (literally spatula and pan) with over eighty recipes, of which at least twenty can be taken as serious contributions to promoting the delicate art well beyond the confines of South Asia. The dishes are not reproduced at random, but in eleven carefully chosen segments, the occasions representing Hindu and Muslim religious festivals, major cultural events and seasons. Nothing would prevent a dish migrating from one segment to another, but the format does make for easier understanding of what the connoisseur would consider appropriate. The range of recipes is vast and the chef takes us from the seemingly mundane cooking of lentils and eggs to the famous katchi biryani of Dhaka with its thirty-seven steps, cooked at a leisurely pace by a master chef and his assistants in 15 to 18 hours, but which, Osman assures his readers, could be done in 1 hour of preparation and 2 hours of cooking.