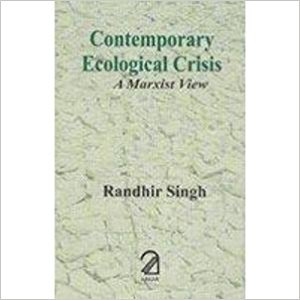 Author Randhir Singh rightly critiques capitalism as the root cause of today’s global environmental crisis in his exposition of the Marxist view on the subject. In this book review I summarize his thesis and present a few seeming lacunae in an otherwise well-structured work that provides valuable insights into a problem that has plagued modern man and his institutions of governance for some time now. Singh’s purpose is to expose the structural contradictions in capitalism. Unlike several similar studies on the subject, he chooses not to elaborate on its social impacts. Instead, his goal is to promote socialism as a viable alternative to capitalism as a means to overcome the contemporary ecological crisis.

This slim book, totalling 159 pages, begins with a somewhat lengthy account of the author’s own philosophical and intellectual orientation with autobiographical jottings of his real life engagements as a practising Marxist and a scholar.

Though self-deprecatory about his lack of conventional academic credentials, and disarmingly open about the lack of originality in the treatment of the book’s topic, pointing out varied sources that influenced his thinking, he is nevertheless quite authoritative in his analysis of the structural logic of capitalism, its ‘throw away lifestyle’ and its inherent inability to ‘make peace with the environment.’ Singh’s perceptions on the severe nature of environmental degradation in the contemporary world are substantiated in 23 short analytical sections, which comprise the main content of the book. Through these brief but reflective pieces, many of which are repetitive in theme and based on his review of observations from major global environmental think-tanks and factual reporting by the media; he elucidates his position on the causal forces behind the global environmental predicament.

Marxist writings on the ecological crises facing the contemporary world by and large tend to elucidate the social outcomes of the capitalist misadventure. Singh’s attention remains focused on the (profit maximizing) motives of capitalist entrepreneurship and the inherent lack of sensitivity to the human condition that it perpetuates. His purpose, as he outlines early on in Section Five is to reveal the contradictions inherent within capitalism and unravel their impact upon the present-day environment. He chooses to do so by amplifying the meaning of profit maximization, its rapacious use of resources and its innate inability to accommodate alternative positions on labour welfare and sustainable resource use in its single-minded pursuit of profit.

Unfortunately, the book does not expand beyond this somewhat singular focus and those looking for a clear-cut analysis on the viability of other options of governance for instance are likely to be disappointed. The potential role of civil society in contesting the capitalist orientation, galvanizing public opinion and moulding policy does come up for mention but its potential as a suitable opposition against capitalist might is summarily rejected. Singh’s observations on the lack of viability of other economic pathways that may offer opportunities for more sustainable development including a greater accommodation of the aspirations of the underprivileged are as ‘utopian’ and ‘doomed to failure’ when faced with the might of capitalist power may also raise eyebrows. Admittedly his views are Marxist to the core and in his assessment nothing short of a revolutionary overthrow of capitalist forces can provide a solution to the problem.

The author actually spells out his central thesis only as late as Section Five, describing it as ‘realistic analysis’ of the present system of economic development and its emphasis on proliferation of capital rather than on human development. Until then, he provides a rather laboured background of the ecological consequences of capitalist expansion across the globe recounting horrific incidents of land air and water pollution and also on bodily as well as mental health. Not surprisingly he includes nuclear conflict emphasizing the keenness of the capitalist mode of production to engage in belligerence in order to maintain competitive economic advantage when needed.

The expected diatribe against profit maximization occupies a greater portion of the author’s critique against capitalism. Expounding this thesis he singles out the consumerist culture promoted by capitalism as lifestyle, which he stresses (citing O’Connor) ‘degrades the conditions of production’, namely, both land and labour. He asserts that the votaries of the capitalist mode of economic development are only interested in the accumulation of capital subordinating every human value to its ‘right’ of profit maximization. He substantiates this by citing statistics from significant global players such as The World Resources Institute, Greenpeace and the UN Intergovernmental panel on Climate Change on the horrendous perpetuation of profit maximization.

Singh also devotes two brief sections on environmentalists and their ideologies where he frowns upon their naivete in urging personal sacrifices in the interest of environment. Critical of this moralistic position, he admonishes them for their seeming ignorance of the political reality where capitalists essentially will use all means at their disposal to enhance consumerism if only to enhance profits. Singh, assumedly referring to the Deep Ecology and other Green movements is also quite clear in his dismissal of scientists and activists who promote the biocentric view. Grudgingly admitting that environmental activists and their scientist peers help voice general opinion against the environmental outcomes of capitalist action, he nevertheless emphasizes their inability to acknowledge the deep-seated political nature of capitalist exploitation.

The author then turns his attention to the socialist state and dwells on his proposition that the state can and should come to the rescue. He briefly alludes to the failure of the socialist state as seen through recent examples and dismisses the phenomenon as emerging out of the historical situation where an exclusive concern for economic development (playing the ‘catch up’ game) subordinated the socialist state’s other laudable goals of equality, humane work environment and a democratic and ultimately classless society. Here lies both the strength and the weakness of his argument. One could either follow his ideological conviction or easily counter-question his claim that the socialist state will correct the structural deficiencies of the capitalist order.

Unfortunately Singh does not offer sound structural ‘logic’ based on socialist principles. His own examples of the Soviet Union’s socialist ‘accumulation’ demonstrating poor attention towards pollution control only confirms that the socialist state is not entirely free from the lure of economic competition with the major capitalist enterprises, thereby attributing to that institution the same flaws as the capitalist model itself. On checks and balances to the socialist state and the role of citizens in modifying state policy Singh remains largely silent. This in my view only weakens his claims of the superior potential of the socialist state revealing more of an ideological leaning than a clear, complete and concrete analysis.

Certain positions taken by the author also need further clarification. Despite his avowed abhorrence of the excesses of profit-making he justifies the socialist government’s economic ambitions as a mere accident of historical circumstance, His faith in socialist governance despite its poor environmental track record is therefore questionable and seems more founded on ideological conviction rather than logic. It also begs the question as to how he views the vital issue of checks and balances in such a system and provokes curiosity on Singh’s views on democratic functioning and the conflicts of governing (particularly) a socialist society in an era of market triumphalism.

In terms of solutions to the contemporary predicament Singh is convinced that only a revolution overthrowing capitalist power brokers can provide a solution to the contemporary ecological crisis. Though the author pushes this alternative with great conviction, one is nevertheless left feeling less than optimistic that the resultant pattern of governance will guarantee sustainable development. Of course, given the attractions of rapid economic growth in today’s closely integrated world, whether a grassroots democracy that engages in non-polluting cottage industries can successfully face this growing challenge and provide yet another environmentally sound option of governance is also I suppose, a point to ponder.