Russia, Then and Now 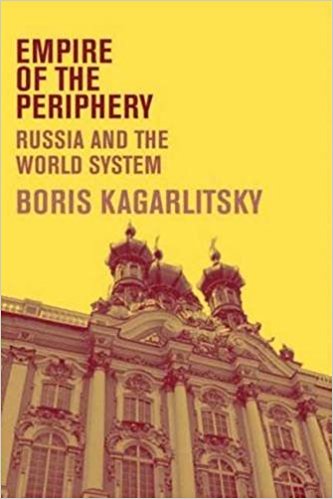 Russia, Then and Now
Achin Vanaik
EMPIRE OF THE PERIPHERY: RUSSIA AND THE WORLD SYSTEM by Boris Kagarlitsky Pluto Press, 2008, 364 pp., price not stated
September 2008, volume 32, No 9

Boris Kagarlitsky, one of Russia’s best known Marxist dissidents has written widely on a range of issues. His latest offering, one of his best, is a history of Russia (and the Soviet Union) that situates it firmly in a wider European and world framework. It marks a break from the two dominant traditions in Russian historiography—the Slavophiles and the westernizers-liberalizers—that see Russian history as either unique or anomalous. The former perceive a distinctive essence, even a ‘soul’ that explains Russia’s historical trajectory; the latter try to understand why Russia deviated from a European ‘norm’ and therefore how it can return to its truer moorings. Kagarlitsky sees Mikhail Pokrovsky, one of the most important of Bolshevik historians (1868-1932) as providing the key analytical prism—the role of commercial capitalism—for understanding the evolution of Russian state and society.

But this remains an incomplete theoretical foundation until it is combined with a form of World Systems analysis whose most important practitioners have been Ferdinand Braudel, Immanuel Wallerstein, Samir Amin and Andre Gunder Frank. Only then is it possible to understand why Russia’s comparative backwardness vis-à-vis the major European countries and its peripheral status has been reproduced across the centuries.

There is then to begin with, a major theoretical dispute here between Marxist thinkers and historians pertaining to the very understanding of capitalism as a historically emergent phenomenon. One approach (which includes World Systems theory) locates the rise of capitalism through the spread of commerce, towns, money and markets and the growing international division of labour that accompanies and promotes this. In contrast the school now most associated with the work of Robert Brenner and his admirers has insisted on the rise of a stable agrarian capitalism first in England through the transformation of rural production relations—a capitalism in one country whose subsequent industrial and economic success and competitive pressure forced other European rivals to carry out from above (by the state) measures which in some cases stimulated bourgeois revolutions from below (and a civil war in the US) so as to enable a comprehensive capitalist transformation and development of these countries. A more in-between position is held by Perry Anderson who talks of a ‘value-added’ process of capitalist development in Europe and the North Atlantic. Both these positions differ decisively from Kargalitsky who has nailed his flag firmly to the mast of World Systems analysis declaring (p. 13) that ‘Capitalism rose simultaneously as a world economic system and as a mode of production’ (emphasis, reviewer’s).

Although this crucial theoretical stance is not seriously defended nor is the Brenner/Anderson opposition systemically refuted, the author has adopted the World Systems approach because he clearly finds it most suited to his understanding and exposition of Russian history in a sweep that goes from medieval times to the present. One can disagree with his underlying theory and yet find this survey fascinating, deeply informed and at times brilliant in its insights. How is this so? This is because a World Systems ‘centre-periphery’ approach will also traverse much the same terrain and come to much the same judgements as explorations founded on an alternative theoretical master-key such as capitalism’s ‘uneven and combined’ process of expansion and development at various levels, be these geographical, sociological, political or technological.

Drawing on the work of Pokrovsky, Kagarlitsky locates the peripheral character of Russia from the nineteenth century onwards in the endless replay of conflicts between industrial and commercial capitalism. This is in contrast to the advanced capitalisms of the Centre where this tension is largely resolved to the advantage of industrial capitalism at home while allowing a flourishing commercial capitalism abroad that then acts as a conveyor belt for the transmission of surpluses from the colonies and from politically independent peripheries like Russia (and Latin America) to the Centre. What is more, the inevitable longer-term crises of over-accumulation that capitalist countries/regions by their very nature must face, are, in the areas of advanced capitalism, ‘resolved’ by major reconstructions/reorganizations based on new technological revolutions and by the creation of new relations between the state and private capital, e.g. Keynesianism/Fordism and then neoliberalism.

If this is the general framework provided in a 25 page introduction, two-thirds of the remaining text (including end notes) is devoted to a survey of Russia from the ninth century to the end of the nineteenth. In these chapters there is a fascinating account of the formation of the original state of Rus, of Russia’s relationship with other European powers through the centuries, of the importance of Baltic trade for its economy. Here Kagarlitsky takes powerful issue with various schools of historical interpretation as to how these and other factors best fit together to explain the formation of Russian society, the travails of the Muscovite state, the purpose and impact of the Stolypin reforms concerning serfdom, the continuities and changes in Russia’s economic structure where one such key continuity is the role of Russia (in rivalry with Poland) as grain exporter to the European Centre. Along the way the author discusses the reasons for the rise of Ivan the Terrible and of Peter the Great and the impact of their policies on the development of Russia’s socio-economic and political-cultural formation. Clearly there are bitter evaluative disputes among historians in these respects. If one cannot fail to be impressed by the depth and range of scholarship shown in these pages, final judgements about the accuracy of conclusions drawn is best left to those far more familiar with Russian history and scholarship than this reviewer can ever pretend to be.

Kagarlitsky’s overall conclusion is clear. Even as Tsarist Russia becomes over the centuries an expanded territorial entity and achieves a considerable measure of development, even industrialization, this essentially reinforces its status as an ‘empire of the periphery’. Defeat in the Crimean war (when Russia sought to expand at the expense of the Ottomans) by a Britain and France unwilling to countenance such expansion, accelerated Russia’s turn towards partial reforms in the countryside and a top-down industrialization process which was highly dependent on foreign investment and foreign credit.

What did all this amount to socially and politically at the turn of the twentieth century? Why the 1905 revolution, facilitated but not caused, by Russia’s defeat at the hands of Japan in 1904? Why the 1917 revolution? Despite different theoretical premises Kagarlitsky would have little dispute with Trotsky. Russia’s uneven and combined capitalist development had created a highly unstable situation—a weak ‘sociological amalgam’ of older rural elites and newer capitalists beholden to both foreign capital and an imperial state also dependent on external capital facing a substantial layer of poor peasant proprietors and a large landless layer unable to be fully absorbed by a rising but sectorally restricted industrialization process which in turn created a fast-rising urban proletariat (and intelligentsia) increasingly hostile to the dominant classes and to the imperial state. Unlike the bourgeois revolutions of France and the US where a rising new elite could harness substantial popular support from below, the Russian ruling classes much weaker internally relative to its lower classes and therefore fearful of it, could never hope to carry out a radical capitalist restructuring that alone could propel Russia to the ranks of the advanced capitalist states. If the objective conditions for revolutionary change were over-ripe, to the Bolsheviks and its leadership goes the credit of establishing the subjective conditions that could take advantage of this situation.

In the chapters that trace the evolution of the Soviet Union from 1917 to today’s Russia, the author displays an admirable sense of balance. Kagarlitsky correctly insists, in opposition to rightwing and liberal historians, that there is no totalitarian continuity from 1917 to 1991. The period 1917 to 1919 was one of remarkable political-democratic flourishing unmatched in many respects by anything ever produced anywhere else. From 1919 to the ‘Great Turning Point’ of forced collectivization (1929-32) is a period of authoritarian one-party rule still very different from the Stalinist totalitarianism of the thirties and forties till his death in 1952. This was followed by the authoritarianism of post-Stalin Soviet Union till Gorbachev, and then the dissolution of the USSR. Where Kagarlitsky provides an original and powerful insight is in closely linking the ‘Great Turning Point’ to the Great Depression. The conventional view has been that since the Soviet Union escaped the prolonged depression of the thirties its economy was clearly disconnected from the world market. But post-Civil War Soviet Union could only carry out its industrialization programme by exporting grain to import necessary machinery and equipment. The Great Depression by lowering grain prices on the world market made it more urgent for the Soviet state to forcibly requisition grain (even as overall production fell) not just to feed the cities but for export purposes. It is only from 1931-32 that it could carry out a massive import-substitution industrialization programme that protected it from the Great Depression.

Russia after 1991 experienced a worse economic deterioration than it did in either WW I or the next great war. It now has a country-wise ranking among developed/developing states that is below what it had under Tsarist rule leave alone what it had achieved under Soviet rule. Today, via the misrules of Yeltsin (oligarchic capitalism) and Putin (bureaucratic capitalism) Russia is an ‘authoritarian democracy’ (a kind of presidential autocracy) politically while economically it is primarily what it has been for centuries—an exporter of raw materials (plus weapons). This then expresses the constancy of being a peripheral and relatively backward capitalism, only now it has lost its ‘empire’. In this systemic transition from a ‘deformed socialism’ to a deformed capitalism the privileged and the powerful (the top bureaucratic layers) most responsible for the oppressions of the majority under the Soviet system are precisely the social layers who have become the greatest property-owning beneficiaries of this enormous structural change. Those who have now joined the ranks of the global capitalist elite have every reason to commend this transition and to absorb the values and beliefs of the victors in the Cold War.

That is why the worst history is invariably provided by the victorious and by their defeated one-time opponents who have now become their practical, intellectual and moral accomplices. The best and most balanced histories come from the losing side, from those who opposed the power elites of the past refusing to accept their dishonesties and prejudices; and who also refuse to succumb to the deceits and biases of the victors and their intellectual hangers-on. We need therefore to be grateful for what Kagarlitsky has given us and to hope that there are or will be others who will plough a similarly independent and courageous furrow.

Achin Vanaik is Professor of International Relations and Global Politics at the Department of Political Science, Univerity of Delhi.