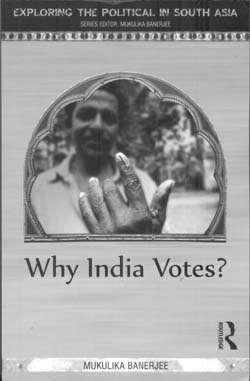 India’s democracy is acknowledged and cel- ebrated, at home and abroad, especially because very few Asian, African and Latin American societies have been able to maintain liberal democratic institutions and practices. The admiration is often laced with a sense of amazement as India still lacks almost all the ingredients that are supposed to make democracy a success. For these analysts, India seems to be ‘an ideal case for testing democratic theories’ (Weiner, 1983: 51) for ‘democracy in India is a phenomenon that, by most accounts, should not have existed, flourished or indeed, long endured’ (Mehta, 2003: 2).

Against the grain of such celebration of the ‘widening’ and ‘deepening’ of democracy in India, many astute commentators have been prompt in cautioning us that democracy is being viewed and judged primarily in its minimalist electoral form, encompassing nothing but a multi-party system, regularly held elections and peaceful transfer of power. Khilnani, for example, points out that ‘the meaning of democracy has been menacingly narrowed to signify only elections’, primarily due to the ‘weakening of other democratic procedures’ (Khilnani, 1997: 58). Arguably, the ‘burden of deliberations and protest have transferred to the institution of elections alone’, as Parekh puts it (p.19). Apart from being largely free and fair and well organized by the Election Commission of India that enjoys a very high level of public trust and legitimacy, high level of electoral participation involving massive populace receives far more emphasis than substantive concerns of democracy such as freedom, justice and accountability where India’s case is not strong.

Not surprisingly, then, the study of electoral politics has assumed great currency in recent decades. A running theme in most of these studies of electoral politics in contemporary India is the phenomenon designated as ‘democratic upsurge’ (Yadav, 2000). The upsurge refers to the ‘third electoral system’ (Yadav and Palshikar, 2009) that has been marked by the fragmentation of the party system and has witnessed the mobilization and politicization of those social groups by the ‘social justice’ parties which had remained politically dormant in the initial years of Independence under the hegemony of the dominant Congress party. These groups were either economically poor or they were identity groups, which had been historically disadvantaged and hence politically dormant on the basis of caste or religion. The overall turnout level in assembly elections has touched around 70 per cent up from around 60 per cent in the 90s. There has also been a substantial narrowing of the gender gap in voter turnout and an upsurge in the turnout among dalits and adivasis, though not necessarily the Muslims and the very poor (Yadav and Palshikar, 2009: 397). This increased turnout is being widely taken as an indication of growing political involvement and participation, leading to vast expansion in the proportion of active citizens, which, in turn, has caused unprecedented volatility of electoral outcomes, forcing political parties to seek new forms of political alignments and support.

Unfortunately, however, most writings on the elections tend to focus on ‘the formal sector of politics (Election Commission, electoral reforms, political parties, manifestos, electoral outcomes) rather than the substance of politics, the meaning of vote, shaping of the agenda and party platforms, the back calculus of politics and the role of money and crime in shaping and restricting political choice’ (Yadav, 2010:350). As a result, sifting through most of the available literature hardly enables the reader to gauge comprehensively the implications of emerging electoral processes for social and economic democracy.

The book under review makes a significant contribution to the existing literature on elections in that it raises a vital research question that has remained under-explored in the election studies. Going beyond merely answering the usually asked questions like ‘how India votes’/ ‘who voted for whom and why’ in a laboured manner with the help of umpteen data and tables showing the shifting electoral trends as is the dominant trend among ‘election experts’, the book breaks new ground venturing to answer the ‘why’ behind India’s voting pattern.

By all accounts, ‘why India votes’ is not such an easy question to answer as the author herself admits, considering the sheer number and diversity of the Indian electorate spread across different geographical and cultural regions turned in to electoral regions, each having its own specificities. The question assumes significance also when one considers the fact that more than a third of the electorate in India continues to suffer from abject poverty related infirmities, despite every party since Independence that has sought their vote has promised to effectively implement poverty alleviation policies. So ‘why do poor people bother with voting when elected governments do not seem to be making their lives any better in a significant manner’? CSDS-NES surveys data reveals that the marginal sections have been among the most enthusiastic voters in the recent elections. Why has it been so? What is so special about elections that even though they legitimize a system that ultimately fails the vulnerable, people invest such faith in them (p.172)? Why are Adivasis more enthusiastic voters than the rest of India even in Naxal infested poorer regions of India? What explains Muslim OBCs voting in larger numbers than other OBCs communities as per CSDS-NES’2009 data (p. 31)? Is the ‘assertion from below’ happening because of the increased number of parties that now allow them alternative choices? But then most of the mainstream parties including these state level ‘ethnic’ parties, despite their differing support base across the regions and identities increasingly resemble each other both in terms of their ideological/electoral agenda and also in terms of their abject failure in providing pro-people governance. Do the voters then, especially the vulnerable ones, simply vote because they receive material benefits (hard cash/goods/food/liquor) during the campaign and are promised patronage and protection more often than not along caste and communal lines? Is it that the illiterate unwashed masses exercising their voting rights in ever greater number are the ones who are easily driven by their ‘own’ charismatic leaders who appeal to their caste/community based loyalties (pp.8-9, 172-73,175)?

It is not that political analysts, as Banerjee points out, engaged with the study of India’s political democracy have not grappled with the above puzzle. Kohli (2006), Varshney (2000), Bardhan (2005), Kaviraj (2011), Mehta (2003), among others, have referred to the ongoing mobilization of the masses on the basis of ‘ethnic nationalism—instead of the less volatile interest-oriented appeals’ at the time of elections as a ‘substitute for pro-poor politics’. ‘Is India increasingly stuck with a two-track democracy’, Kohli caustically asks, ‘in which common people are only needed at the time of elections, and then it is best that they all go home, forget politics, and let the “rational” elite quietly run a pro-business show’? (Kohli, 2006, part 1 and 2:1252 and 1368-9).

Banerjee sets out to explore the puzzle by connecting ‘the key benefits of the ethnographic approach with a comparative multi-site approach’ that included the use of data generated by NES surveys (p.12, 33). The four principal research questions that were asked by 12 researchers from 12 fieldwork sites covering 11 states related to having a look at a) the election campaign from the vantage of voters; b) the language of politics being used by the electorate; c) electorate’s feelings while voting; and d) finally asking people the ‘key’ question ‘why do you vote’ (p.12)? Drawing mainly from the responses of the electorate—rural as well urban spread across the different electoral regions—as reported by the field researchers who spent a month covering a polling booth area during election time, Banerjee comes out with some fascinating observations. Consider some of them. When being asked why they voted, the socially and economically marginal respondents would ask counter question: ‘why would you not vote’ making the question look absurd (p. 173). Banerjee suggests that the electorates vote with such enthusiasm because they are animated by a variety of reasons. For one, a whole range of respondents would argue that without performing their duty as citizen to vote they could not hope to assert their rights as citizens in an effective manner. They would value their electoral participation as it was to make ‘India’s democracy work’. The disgruntled electorates in particular were ‘clearly motivated to vote to remind the state of the importance of the sovereignty of ordinary people in a democratic country’ (p. 167). There would be a sense of empowerment and feeling of being co-participants in democracy as the powerful politicians belonging to the dominant castes would come to their homes begging for vote though they would also know that it was going to be a short-lived experience. A dalit man is quoted saying ‘at election time even if the candidate is from an upper caste he still has to come to my doorstep to ask for my vote’ (p. 168). The poor and illiterate voters would also vote as they would fear ‘losing their rights or the benefits that the state gives them’. The relatively better placed electorate in economic and social terms would vote ‘mainly on account of the ties of patronage’. Finally, the middle and the upper strata of the electorate showing wariness with the way state and political institutions are working of late vote ‘out of a sense of civic duty’ (p. 168).

Besides the main text, the reports filed by the field investigators are worth reading especially the narratives which are so insightful. The way the poor illiterate masses belonging to the four corners of a vast country play with words and use metaphors to convey both their understanding and deep sense of interest for electoral mode of democracy is fascinating, telling us most meaningfully as to why democracy thrives and remains vibrant in a difficult country like India.

Banerjee deserves rich accolade for not only taking up a most important research question that has remained under-explored in election studies but also for her methodological innovations while looking for possible answers. This reader-friendly and methodologically sound research work is highly recommended for everyone who is interested in deciphering the minds of inscrutable electorate especially those on the margins, as they enthusiastically prepare themselves for yet another round of ‘free and fair’ elections in the largest democracy in the world.