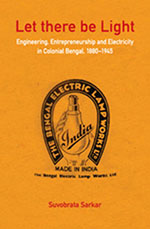 The title of Sarkar’s book derived from this legendary quote in text Genesis of the Bible in a way exemplifies Suvobrata Sarkar’s fine work. Sarkar’s work illuminates the complex process of technology adoption and transfer in Bengal and its contentious equation with the rebirth of Bengali entrepreneurship after the setbacks of the 1840s, a trend which was witnessed in its nebulous stage in the closing years of the 19th century and achieved its full bloom during the Swadeshi period. Sarkar argues that the history of western technology and the intricacies of its transfer and adoption by the Bengali intelligentsia cannot be understood unless we analyse the role of educational institutions in acting as a harbinger for technology in Bengal. Sarkar remarks at one place in his book that the work could indeed be called a study of the education of Engineers in Bengal.

This urgency and preoccupation with technology and more specifically engineering received an impetus on both sides post the 1880s. This phenomenon according to Sarkar corroborates the chronological framework of his work, i.e., 1880-1945, which stretches the time-period of his work literally to the eve of Independence. Sarkar’s work depicts a picture of frenzied activity on the part of both the colonizers and the colonized. The Colonial Government initially felt the need only for native Civil Engineering graduates to fill the rank of overseers and other lower ranks in their various construction projects. Sarkar opines that the exigencies of empire would subsequently prompt the colonial regime to diversify its investment in multiple branches of engineering.