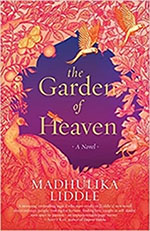 This historical fiction tells the stories of a ten-year boy, Madhav, and the family of Sridhar Sahu and Ratna. Their stories, spread across two invasions of Delhi—of Muhammed of Ghur in 1192 CE and Taimur in 1398 CE, tells another very important tale—the way the ‘medieval past’ seems to haunt the present. Madhulika Liddle writes in the mode of scholars who focus on Delhi, such as Sunil Kumar (The Present in Delhi’s Pasts), Percival Spear (Delhi, Its Monuments and History), RE Frykenburg (Ed. Delhi through the Ages), Narayani Gupta (Delhi between Two Empires 1803-1931) and Upinder Singh (Ancient Delhi). Like these historical narratives, The Garden of Heaven situates the geographical areas in present-day New Delhi during the period 12th to 14th century AD, when Muslim dynasties entered Delhi and the structures of Qutub Minar, Hauz, and Jami Masjid were built using materials from Hindu and Jain temples. We learn about these monuments through the eyes of stone cravers such as Balram and Madhav, and distant memories of Musa Dadu and Shagufta. And through their lives, we enter into memories of communal distinctions and harmonies which almost every Indian regards as a part of her country’s social history. Here we see the inevitable confrontation between what one knows through one’s own experience, what one can learn secondarily from others, and what one can glean from the stories one hears concerning the origins of civilization, and its philosophical context. Just as words find meaning in the syntactic framework of the sentence and the sentence in the paragraph, so do monuments and people gain meaning within a context of genealogy, travels, stories of origin and beliefs—the understanding of man’s place within the universe. In the strict sense that history represents factual, verifiable knowledge, the greater part of what we call history or write as historians is clearly fiction. And as a novelist, Liddle, repeatedly (almost joyously) blurs these distinctions.