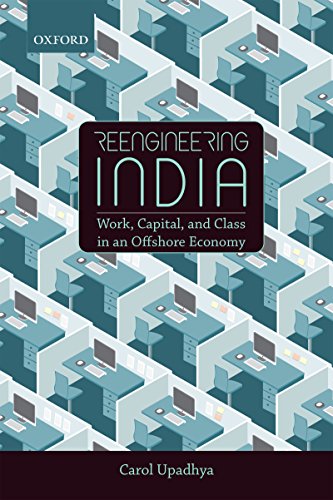 The Indian software industry that flourished since the 1990s was central to the effervescent nationalist enthusiasm about the ‘new India’ in the making in the post-liberalization era. Now, we seemingly witness the waning of the industry, and hence it offers a great opportunity for social scientists to examine the Indian ‘software boom’ in its manifold hues. Carol Upadhya provides the readers with a nuanced exploration of the industry through her ethnographically dense analysis in Reengineering India.

Significantly, the book contributes to our understanding of global socio-economic processes since the emergence of the neoliberal paradigm in the 1990s, by analysing Information Technology (IT) as a corporate field that came into existence at the intersection of old and new social configurations related to labour, capital, working subjects, and middle class. Upadhya also brings in the caste dynamics of globalization in her analysis. The book convincingly pitches itself against an early wave of studies on globalization that presented a tight hierarchical relationship between the centre (the West) and its peripheries (like India) by adopting a more nuanced framework that is attentive to the multi-directional flow of capital, labour, technical skills and workforce in the making of globalization. The author suggests that ‘local modalities of capital accumulation and social configurations deeply inflect the trajectory of globalization in postcolonial countries such as India’ (p. 6). Against this broader backdrop, she examines the co-evolution of the IT field within the new economy and the social imagination of a brand new India since the 1990s.

As the framework of analysis, in the first chapter, the book develops the idea of ‘software capital’ à la Kaushik Sunder Rajan’s concept of biocapital, to trace the genealogies of the emergence of ‘offshoring’ of largely service-related jobs to Indian IT firms. For Upadhya, software capital signifies the historically and culturally specific formation of capital in the social field of Indian software industry. She identifies three unique types of software capital,—‘the national’, ‘the multinational’, and ‘the transnational’— which jointly defined the nature of Indian IT industry. These three forms of software capital, through their complex interactions have shaped corporate identities, organizational configurations, work culture, and the self-image of IT professionals, and thus generating new social imaginaries.