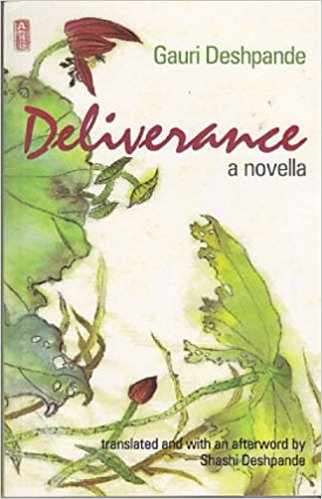 Deliverance opens with a one-line letter written by two sisters, Mimi and Shami, to various people across the world—Ranju, Janaki, Toshi-Ojisan, Yoshiyo-Hisayo, and Dr. Abhi—about their parents’ death. From this terse assembling of all its characters at the very beginning, the story reaches back into the past and gradually brings it back to the present. The past is recalled as a series of conversations between the various characters, recorded in letters, therapist’s notes, and the diary entries of the protagonist, the mother. Through them we learn about the emotional turbulence that threatens to tear the family asunder, but also the many ties of friendship and companionship that are affirmed through, and in spite of, these shocks. These then, are the niragaathii (literally tight, but also knotty ties) of the novel’s original Marathi title. Gauri Deshpande’s novellas and short stories are well known for their masterly observation of human relationships, especially that of man-woman. Her straightforward, yet deeply sensitive exploration of female sexuality, companionships, marital politics and family dynamics carved a space all its own in Marathi literature from the 1970s onwards.

She created a world with women unafraid to express themselves in the first flush of love or about a middle-aged reassessment of their choices and options, laughing at, or acting upon them. Her prose was unadorned, conversational and firmly rooted in an everyday Puneri Marathi idiom, but her characters and plots were drawn from all over the globe, and restlessly roamed it as well. The intimate, confessional form of a single narrator’s letters or private musings became her specialty, at once her technique for sketching worlds made up basically of relationships, and for instantly drawing her readers into these webs.

In many ways, Deliverance is a classic Gauri Deshpande work in form and content, but it is also unique for its searing, frank look at motherhood through the eyes of a sincere, even eager, but frustrated woman who confronts the realization that motherhood is thankless and all-consuming. Before I became a mother, I had thought that this new experience, this new person, would fill some gap in my life, that I would become more complete, that one of my life’s potentials would now be realised, and so on. But what happened was just the opposite. Because of the children all my activities were curtailed. I began to wonder whether we shouldn’t deduct fifteen or twenty years from our lives on account of them. No going out, no seeing anything, not even just simple reading and writing. Keep yourself ready for fulfilling the children’s demands—that is all!… To whom can I speak of this? Ultimately, only to myself. In this world everyone will say—you took it on knowingly, now go through with it. But when I see what the children and I suffer as we go through with it, I think one must speak the truth some time. Don’t go on praising motherhood—say that it is boring, repetitive, constricting and devastating, both for the mind and the body. Does everyone know this truth, and is this why they cloak it with fond admiration, praise, love and regard?

References to Gauri Deshpande’s famous family lineage, which included her mother, the anthropologist Iravati Karve and grandfather, the social reformer D.K. Karve, and the similarities between Deshpande’s own fiercely independent personality and unconventional life and her fictional characters and plots often dominate critical discussions of her work. Critics sympathetic to these plots and liberal concerns approvingly trace them to this genealogy; those less so have criticized her for thinly fictionalizing the superficial emotional dilemmas of the tiny, well-heeled world she herself belonged to. This novella in particular is also reputed to have been the most autobiographical of all her fiction, impelling her daughter Urmilla to write her own fictional rejoinder, of sorts (A Pack of Lies), to the mother-daughter relationship depicted in Deliverance.

The similarities of Deshpande’s life with many of her plotlines, including that in this novella, are obvious enough. But these speculations have often tended to obscure the broader themes and concerns that emerge in her work. The strength and novelty of Deliverance is not simply in its refreshing frankness about the tedium of motherhood. It is also in the way Deshpande deploys this realization to unsettle easy assumptions about which human bonds are necessarily firm and which ones are not. Even as the security of the deepest of these bonds—the mother-child relationship—is ruthlessly undercut, it is those links that begin as perfunctory ties, or casual acquaintances that stand the test of time. It is the step-father who is closer to the daughters, the half-sisters who form a bond, the friends, old and new, from different races and countries, who provide the most emotional support, and far-flung distances and letters that provide greater sustenance than the geographically or filially more immediate links. Through the myriad crises and everyday rhythms that the characters share with each other, Deshpande underlines forcefully the primacy of chosen relationships over blood ones, and of individual ties over filial, community or national bonds. The novel’s denouement epitomizes this consistent refusal to fall in line with the given, whether by fate, or by society.

And yet, this is no naïve celebration of a global village. These are choices made amidst contrasting pulls of different desires, not least the yearning for roots, land, and home. In the latter half of the novel, the protagonist settles in a tiny village with her husband even as her daughters and friends spread far and wide. Working the land and immersing herself in its sheer materiality is a means for her to come to terms with these distances and displacements, and find memory and meaning, and finally the acknowledgement of mortality, in the land itself. The sympathy with which Deshpande creates this world makes this novella an eloquent affirmation of friendship and a powerful, universal story about the myriad possibilities of freedom. The English title for it, Deliverance, is a very apt choice.

A strong point of Deshpande’s fiction, especially in the early stories, was her unapologetic, brusque style, especially in sketching characters (‘That’s The Way It Is!’ to quote the title of her famous Marathi short story collection, Ahe He Ase Ahe). But this brusqueness is often annoyingly unsatisfactory when it comes to minor characters—usually friends or husbands—who tend to become mere foils for the more carefully sketched women protagonists. Deshpande declared herself impatient with the back-stories of her characters and their relationships, preferring to painstakingly focus on moments of individual tension or introspection. This is perhaps why she was much more at home in the Marathi genres of the laghukatha (short story) and deerghakatha (literally, long story, novella) rather than a full-length novel. But the rough sketches of minor characters who hint at deeper, interesting personalities—like, in this case, Dick the Dutch friend (and lover?) or Yaju the husband—often leave the reader hungering for more, impatient with Deshpande’s reluctance to probe their depths.

Gauri Deshpande’s death in 2003 occasioned a flood of commemorative writings and fresh editions of her Marathi fiction, allowing a new generation of readers, many of them living with and experiencing the dilemmas of far-flung families and cross-cultural relationships in the wake of the wave of migration to the West from the 1990s onwards, to connect with her writing and characters. One wishes that her brilliant translations, especially that of the Arabian Nights into Marathi, would also be as readily available! Shashi Deshpande’s translation of Niragaathii is even and smooth, even a bit too much so. The original Marathi text delightfully intersperses a lot of English usage into a very everyday, chaste, Marathi prose but somewhat puzzlingly, this multilingual texture of the original has been smoothed over in the translation into a seamless English. This is, nevertheless, a very good and valuable introduction to English readers of Deshpande’s Marathi fiction.

Prachi Deshpande is with the Centre for Studies in Social Sciences, Calcutta.