Revisiting the Class-Caste Debate in the History of Bombay 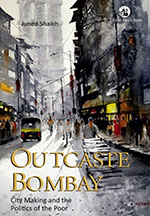 Revisiting the Class-Caste Debate in the History of Bombay
Harish Wankhede
OUTCASTE BOMBAY: CITY MAKING AND THE POLITICS OF THE POOR by Juned Shaikh Orient BlackSwan, New Delhi, 202, 227 pp., 995.00
March 2022, volume 46, No 3

For the political elites of the modern nation, new cities like Mumbai and Calcutta were the ‘liberated space’. They were hopeful that with growing industrial capitalist advancement, the erstwhile caste hierarchies and feudal control would be broken and a cosmopolitan secular milieu can emerge. Babasaheb Ambedkar thought that migration to cities would help the Dalits to escape the feudal-Brahmanical servitude whereas the Communists imagined that urbanization would make caste redundant (p. 5) and foster a robust working-class unity to bring revolutionary transformation. Juned Shaikh’s work examines the failure of such modernist hopes in the colonial city of Bombay.

The early nineteenth century witnessed a vast migration of Dalits to Bombay with great hope that the new economic prospect would enhance their social and class positions. However, they soon noticed that private economic affairs were monitored under conventional caste networks, and they were often relegated to hard manual/menial jobs (mainly in sanitation, construction, manufacturing and textile industries). They suffered under abject poverty, insecurity and had to survive in poor ghettoized slums. Importantly, the Dalit workers, relegated to low-paid jobs and restricted to the bottom of working-class hierarchies, faced open caste discrimination and humiliation from their co-workers and employers. The author surveys the housing problem in the city and showcases how the existing social hierarchies were reintroduced in granting employment, residential spaces and forming political alliances (p. 28). Caste became a key supplement in structuring the capitalist system and the Dalits thus created a ‘symbiotic relationship’ (p. 5) with the nascent class politics.