Portrait of a Vibrant Complex City 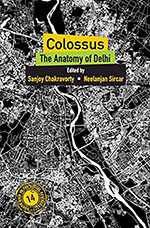 Within the next three decades, India is expected to have more than half of its population living in urban areas.[1] India’s urbanization is unfolding across a wide diversity of cities and towns, from megacities like Mumbai and Kolkata to a massive constellation of smaller cities and towns that are strewn throughout the country. Colossus centres on one of India’s largest and most important cities, Delhi. Edited by two leading scholars of Indian politics and society, Sanjoy Chakravorty and Neelanjan Sircar, the book offers a detailed portrait of this vibrant and complex city.

Colossus is a major scholarly achievement. It significantly advances our understanding of Delhi, and contemporary urbanization in India more broadly. The multi-disciplinary team of contributing authors walk us through an impressive range of themes including social change and social segregation; migration; marriage practices; spatial inequalities in access to public services; crime victimization; energy use; the emergence of the Aam Aadmi Party; and Delhi’s alarmingly high levels of air pollution.

The empirical heart of the book is a large and representative survey of 5,477 households across the National Capital Territory as well as surrounding areas in Haryana, Uttar Pradesh, and even Rajasthan (the CASI-NCR Survey). The authors importantly go beyond the National Capital Territory, acknowledging that Delhi is intimately connected with those areas in its periphery.