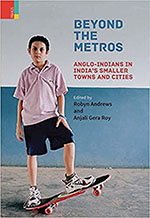 The book Beyond the Metros: Anglo-Indians in India’s Smaller Towns and Cities is a tremendously fascinating analysis and depiction of the Anglo-Indian identity, its representations and nuances. It thereby deconstructs the monolithic image that the term carries. The book’s deliberate focus is upon the non-metropolitan spaces, as it intends to make a clear distinction from the modern, urban spaces of cities. Cities are usually seen as a site of assimilation of different identities that may account for acculturation, often due to modernization and urbanization. Hence, the metros inadequately portray the real socio-cultural location of the Anglo-Indian identity in contemporary India. Therefore, the book has divided the study into three parts. The first part investigates the railway towns such as Kharagpur, Asansol, Jhansi, Jabalpur and Secunderabad and the impact they had on the Anglo-Indians largely settled in those areas; the second part of the book explores the identity of Anglo-Indians in the Hill Stations of India, especially those related to schools set up by the community. The section looks at Dehradun and Ranchi specifically. Finally, the third section makes an attempt to understand the socio-cultural and historical position of the Anglo-Indians based in the port cities of Pondicherry, Cochin and Goa.

The topographical and geographical approach adopted in this study is extremely useful in deconstructing the homogenous identity of this minority community in India. The intersectional reading of the already hybrid identity further underscores the subtle cultural mappings between the Anglo-Indians settled in the south of India and those in the north. The book traverses the journey of the once privileged Anglo-Indians of pre-Independent India to the contemporary status that they have been reduced to, post-Independence. The changing structures of the Indian economy had an effect on job creation for the members of the community, and the community suffered in the process. The study of their survival in the Indian States with a simultaneous longing to belong to the West, complicated matters for them further. This is accounted for in the testimonies, lived experiences and memories that have been recorded.