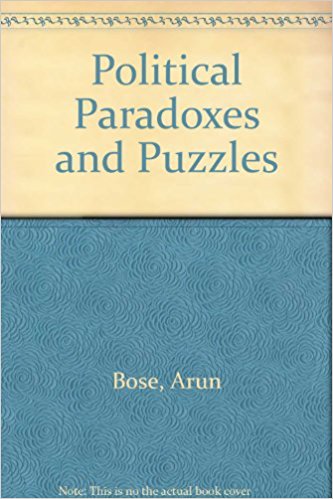 First order theoretical activity has been rare in recent literature in social sciences. Works which convey an integrated social understanding and a sense of historical sweep, and which possess a philosophical quality while at the same time relating themselves to common human problems, are not easy to find. But claims to such status are not scarce.

Arun Bose’s work makes a valiant attempt at contributing to the develop­ment of a science of politics. Though the attempt does break new ground, the exercise as a whole is inhibited by several methodological paradoxes and ideological puzzles, to use the author’s own terms.

Among the approaches which have during the past two decades gained some currency and respectability, the game theory is one. This approach which originated in course of the formulation of war strategies seeks to explain social and political action by using the analogy of a variety of games. Bose is aware of the grounds for the increasing unpopularity of this approach and studiously tries to refute the criticism.

He thinks that several problems of the contemporary world can be better explain­ed with the use of the game theory. This is built into his general approach that a science of politics can emerge only if the pure moralism of philosophers like Plato and the pure realism of thinkers like Machiavelli are replaced with a dynamic  synthesis, which he calls the ‘rule of reason’.