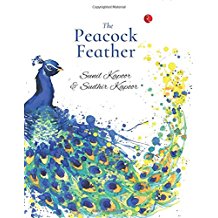 The Peacock Feather is a collection of ten short stories by Sudhir and Sunil Kapoor, who inform us in the preface that they are monozygotic (identical) twins. They believe that monozygotic twins have a telepathic connection which has led them to this joint writing project wherein they have drawn from shared real life incidents ‘blending them , with some fictional and imaginary happenings to inculcate some twist, turns and morals in them’ (p. viii). Having given this bit of information, it would have been interesting if the collection had also included stories individually scripted by each of the twins so as to provide scope for comparative analysis of their creative processes.

In the title story ‘The Peacock Feather’, the narrator reminisces about his bitter sweet schoolboy love for Mohini whom he meets after thirty years. She is now a friend of his wife Shalini, who has invited her to Goa for a visit. The peacock feather has remained a lifelong symbol of his secret feelings for Mohini which he has harboured all his life. He learns at the end of the story that she has always been aware of his infatuation.