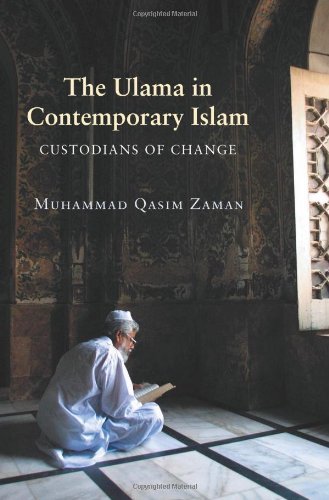 Postcolonial Muslim societies have been mostly understood through the prism of modernization theory. Very often, the focus of these studies has been the ‘modernizing imperative’ of the postcolonial state. Society as an arena of the non-state was studied only in relation to ways in which it corresponded to the modern demands of postcolonial states. Social groups and institutions which could not fit this theoretical conceptualization were seldom made subjects of scholarly attention. It is for this reason that the Ulama or traditionally educated Muslim religious scholars have so far received far less academic attention as compared to the Islamists, who share most of the assumptions of the modern postcolonial state which they oppose. By pulling the Ulama out of such obscurity, Zaman seeks to fill a very important gap in our understanding of Muslim religious authority. Zaman makes it clear at the outset that the ‘transformations, discourses and religio-political activism of the Ulama’ can only be ignored at the cost of misunderstanding crucial facets of Muslim politics. Far from being the passive recipients of the onslaught of modernization, Zaman’s work shows the many ways in which the Ulama have not only adapted and responded to modern challenges, but have also used modern institutions to further their own interests.

The fact that institutions of the Ulama like the madrasas are increasing in numbers and strength lend credence to Zaman’s understanding of the problem. In all the six chapters, Zaman’s, central concern has been to bring about this remarkable adaptability of the Ulama through an analysis of their writings and activities.

Zaman argues that the distinction between ‘religious’ and ‘secular’ is a gift of colonial modernity having no precedence in early Islamic thought. Early Islam did make a distinction between rational (maqulat) and revealed (manqulat) knowledge, but the understanding of religion as occupying a distinct ‘private’ sphere in society has been altogether alien to the Islamic tradition. Zaman goes on to argue, and this is his main argument, that the Ulama accepted this colonial post enlightenment division of spaces as it suited their needs. Moreover, in contemporary times, the Ulama rest and articulate their authority precisely by portraying themselves as the ‘custodians’ of the private sphere. Any interference in this sphere is resented by the Ulama. Thus, as Zaman rightly argues, the Ulama of both India and Pakistan oppose the interference of the state in their institutions of learning, the madrasas, and see it as a challenge to their legitimate authority. It goes to the credit of Ulama that even the postcolonial states in South Asia accept their claim of being the ‘official interpreters of a privatized Islam which enabled them to adjust to new political conditions without a massive or sudden disruption of their authority’.

Having set the grounds, the remainder of the book seeks to understand the strategies through which the Ulama have constructed and maintained their authority. Zaman’s formidable mastery of Urdu and Arabic makes it much easier for him to interrogate the genre of ‘commentaries’ written by various Ulama. The functions of these commentaries, Zaman informs us, are manifold. Firstly it links the writer with an authoritative chain of transmitters of knowledge. Having acquired this symbolic capital, the writer claims an authoritative voice to speak on contemporary religious issues. Moreover, these commentaries also allow the Ulama to build in their responses to modernity, particularly on issues which arise from the use of ‘western’ technology. However, such a construction of authority is not monolithic but depends on the kind of audiences which the Ulama have in mind. Zaman informs us that it is not unusual for the Ulama to speak in different and even contradictory voices depending upon their targeted readership and even the political context. In effect, therefore, Zaman’s work desacralizes the Ulama, making them human and bringing them within the ambit of critical analysis like any other social category. Against the notion of a homogenous Islam, Zaman brings out the plurality within the South Asian Ulama. He not only details the major sectarian division between the Sunnis and the Shias but also between different denominations (maslaks) of Ulama among the Sunnis such as the Deobandis, Barelwis, Ahl e Hadith, etc. Through an analysis of their writings, Zaman seeks to unravel the rival claims from the Ulama of all these denominations to represent ‘true Islam’. Zaman argues that behind the façade of propagating ‘true Islam’, the reasons for radicalization of sectarian identities is to be found in more sociological causes such as urbanization and social dislocation. One hoped that Zaman would also describe the conditions under which Ulama of different and rival denominations forge a common platform as is witnessed in the case of Pakistan, an important aspect on which he is silent. Moreover, he does not tell us whether there is some process towards an ecumenical understanding among these various denominations or even the reasons for this crucial lack of interdenominational dialogue in contemporary Islam. From sectarianism, Zaman goes on to discuss radicalism through a thought-provoking analysis of some madrasas. He argues that while there is sympathy for militant Islam among a section of the Ulama, they are in a tiny minority. Conceptions of the ‘Islamic state’ vary among the Ulama and most of them have a very ambiguous relationship with a militant Islamic movement like the Taliban. Zaman goes on to argue that the radicalization of some madrasas and Ulama in Pakistan is the result of their being used by the ‘Pakistani political elite and the willingness of the Ulama to go along with this agenda’. It is here perhaps that Zaman’s arguments need some rethinking. Through their writings and activities, Zaman makes us aware that the Ulama are not just a reactive social group; rather they have an agency of their own and make their own agenda. Yet when it comes to discussing increasing radicalism in Pakistan, Zaman somewhat dilutes the contribution of the Ulama in it. Moreover, as the work is comparative in nature, it would have been much better to have compared Ulama radicalism in Pakistan with India. There is a sense in which Zaman does not take into account the differential socio-political effects of the nature of state in both these countries. The fact that Pakistan, for all practical purposes, is an Islamic state means that claims to power and legitimacy there will follow a markedly different articulation as compared to India which is a secular state. Thus while it is true that the Ulama in both the countries see themselves as the ‘guardians of the religious sphere’, an important question to ask would be why the Indian Ulama have not charted the same radical path which their counterparts in Pakistan and elsewhere have done.

Zaman concludes that it would be naïve to write off the Ulama as important social and political actors in the future. Scholarship on the Muslim world will necessarily have to take into account the activities of the Ulama for any meaningful analysis. Zaman argues that even as they strive to ‘demarcate and defend their own religious sphere’, the Ulama will also ‘continue to enlarge their audiences, to shape debates on the meaning and place of Islam in public life, to lead activist movements in pursuit of their ideals’. In short the Ulama will continue to be both custodians as well as the authoritative interpreters of Islam. Although he does not mention it himself, Zaman’s formidable work is a necessary corrective to Francis Robinson’s thesis that print enabled the formation of a Muslim public sphere in South Asia. Since theoretically any Muslim could participate in this public sphere, Robinson predicted that the authority of the Ulama as the official interpreters of Islam would decline, which will eventually lead to democratization of Muslim public life. Zaman has conclusively shown that the reality is far more fascinating and complex which should not be pigeonholed to suit European lenses. With extensive notes and bibliography, the book is a must for scholars interested in Muslim histories and especially those concerned with South Asia.

Arshad Alam is with the Center for Jawaharlal Nehru Studies at the Jamia Milia Islamia, New Delhi.