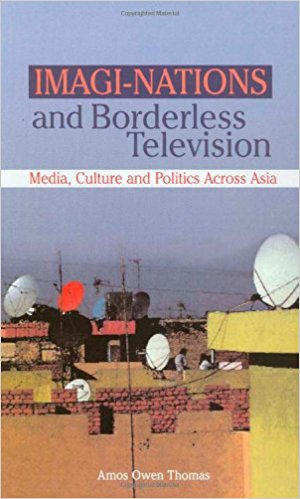 While quantitative research has been rightly critiqued for not being able to adequately address issues within social science research, one of the major problems facing those engaged in cultural studies especially around the media industry is access to facts and descriptive work. Available through market research and surveys, this information is often confidential, for the exclusive use of insiders in the industry. Seen against this backdrop, Imagi-Nations and Borderless Television by International Business scholar Amos Owen Thomas that uses a comprehensive descriptive and factual terrain to look at the phenomenon and spread of transnational television in Asia and some of its convergent cultures with scholarly rigour is a significant book for students and media researchers. The great value of this book is its attention to detail and factual information about what Thomas terms “border-less television” or broadcasting through satellite footprints that are not limited to specific national and geographic terrains.

It is also a welcome addition to scholarly work that has moved away from a market and economy driven discourse around globalization to one that views it within the context of multiple cultural flows. Laying out a history of satellite channels and tracing their origins, ownership and reach, Thomas examines the media scenario in three parts of Asia: South Asia (India, Pakistan, Nepal, Bangladesh, Sri Lanka, Bhutan, Maldives), South East Asia (Thailand, Singapore, Indonesia, Malaysia, the Philippines, Vietnam, Brunei) and North-East Asia (China, Japan, North and South Korea, Mongolia, Hong-Kong, Macau and Taiwan). He also makes a passing reference to television channels and satellites in the Middle East giving us insights into channels like Al Jazeera that shot into prominence during the second Gulf war. In a methodical (and rather self consciously) textbook like manner Thomas lays out the information, placing it against the backdrop of schools of communication, development models and theories on globalization. He adopts a quasi-ethnographic methodology that involves interviews with those engaged in media industries, viewing software and secondary local data.

Satellite broadcasting that came to Asia in its present form in the early and mid-nineties has been the scrutiny of earlier work. For instance among the more recent books to look at this scenario in Asia was Page and Crawley’s Satellites over South Asia: Broadcasting Culture and the Public Interest (Sage, 2001), Dealing with a very vast terrain, the book suffered from an inability to engage with the specificities and complexities of media culture in South Asian communities, often making sweeping generalizations. While Imagi-Nations dispenses with making similar claims, it shares with the other book the perils of having too large a canvas that might overload the reader with too many facts and not enough connections between them.

Thomas has rightly pointed out the need for a sequel or sequels to this book. If anything, the book suffers from carrying too much of information that becomes at times overwhelming. In looking at an extremely vast terrain, it sometimes seems too ‘model’ and ‘category’ driven, and therefore does not account adequately for specificities. For instance while Thomas acknowledges the resistance and/or negotiation of audiences with software that is not always within their own national agendas pointing out how Indian audiences in the northern state of Punjab watch PTV or the engagement of Pakistani audiences with popular Indian film based channels, he is not able to give us a more layered insight into this phenomenon except in a passing mention. The central thesis of the book emerges only in the last two chapters where Thomas addresses some of the common anxieties that national governments have had around “the invasion from the skies.” Culture is always a contested terrain and while transnational television brings with it a certain global (often interpreted as “western”) culture, it has also created a situation where ethnic minorities within national boundaries have been able to have more choice and access through regional channels. The terrain of transnational television also transforms notions of national boundaries and national audiences addressing as it does through footprints a diverse audience that include diasporic communities in other parts of the world. In effect the broadcasting satellite model that was adopted by governments to “integrate” and “unify” their diverse populations has allowed for even more regional aspirations and specificities.

One of Thomas’s stated objectives is to be able to have three “regional and comparative case studies on the development of transnational television in Asia” (p.243). focusing as he does on a detailed description of the Indian subcontinent, greater China and the Malay archipelago. He looks at the impact of borderless television on media industries, advertising and the responses of the state in these countries. Given the vastness of the universe of this book, this comparative framework over territories as huge as China, Taiwan, Indonesia, Malaysia, Pakistan and India blurs the large diversity between audiences on the basis of rural and urban divides, ethnicity, region, culture etc. Also, while he describes how transnational Television captured the imagination of audiences in these countries who were tired of the unimaginative public broadcasting under government regulated channels, what is lacking in his analysis is an engagement with television audiences who are no less significant a player in this debate. This is unfortunate as qualitative data of the kind in this book could have offered very rich insights into the complexities of audience responses that market surveys and trade data often gloss over because they lack the tools to interrogate categories such as “house-wife” or “primary wage owner” and their inherent heterogeneity and porosity. His analysis of ethnic channels for instance or the patterns of cable consuming households would have been richer had they not depended solely on ownership and distribution data.

Having made this critique, this still remains an extremely valuable book in terms of its rich access to information about South Asia. It would be a very useful tool for media scholars and students who wish to study telecommunications and globalization and this book should lay the grounds for new work that could push some of its arguments further. For instance while Thomas has referred to the regulatory responses of the state to satellite broadcasting, corporate censorship that is sometimes much more insidious has been ignored so far in most media analysis. Imagi-Nations has rightly pointed out how while state run channels and domestic channels were forced to alter themselves, partnerships and links also existed between the state and private interests such as advertisers, large conglomerates and smaller interests like local cable operators that have impacted on media policies. Regulation is therefore not limited to the state. Also as the book points out, despite the large reach of the transnational channels their viewership is still small compared to domestic channels and as a result they have needed to diversify into regional and sub ethnic programming in order to sustain themselves. In the final analysis, its is this complex negotiation between different players such as the state, commerce and the industry and an active heterogeneous audience that will need to be examined more carefully for patterns rather than any overarching theories of ownership and control.