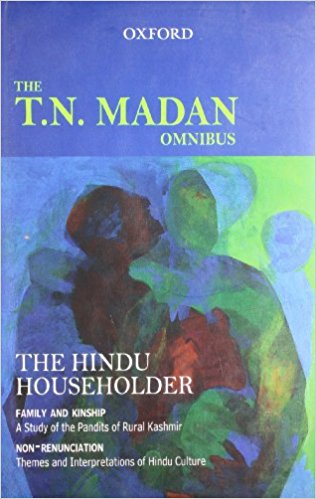 The work of Professor T.N. Madan is in the league of classical sociology in India, which echoes the issues that heralded the Lucknow School of Sociology in mid-twentieth century. Though there has been considerable discomfort in dubbing it a school of thought Lucknow did play a key role in the early sociology of India. It cry-stallized into what Madan elsewhere terms as sociological tradition in India. The tradition, which reflected the dynamic scholarship of doyens such as Professors D.N. Majumdar, A.K. Saran, Radha Kamal Mukherji and D.P. Mukerji, also subsumes the work of Madan. The present Omnibus, hence, provides a meaningful engagement with the tradition of sociology in India. In consonance with the inherent reflexivity of the discipline, Madan reckons with the fluid character of tradition which characterized the negotiations of early masters with the spate of modernization of Indian tradition. But then, it is nothing more than a rhetorical claim as Madan’s work ceases to inch closer to the contemporary issues vis-à-vis the critical discourse on the (il)legitimacy of epistemological binaries in social science analysis. The reader wonders how Madan would engage with the new expressions of the Hindu worldview, the variety of hybrid forms of cultural expressions in the wake of globalization, and also some of the recent questions in the new episodes of political sociology.