A Bow Not Yet Broken 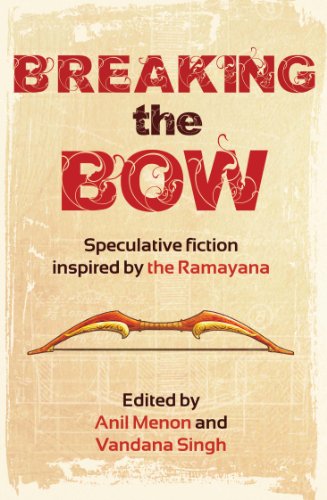 A Bow Not Yet Broken
Madhumita Chakraborty
BREAKING THE BOW: SPECULATIVE FICTION INSPIRED BY THE RAMAYANA by Anil Menon and Vandana Singh Zubaan Books, 2013, 338 pp., 395
April 2013, volume 37, No 4

When asked to review the book Breaking the Bow: Speculative Fiction Inspired by The Ramayana, I was initially quite excited. The reasons were many, but primary was the fact that due to the interest of my four-year old daughter in Indian mythology, I had been reading the Ramayana almost every night with her, telling her the story of ‘Ram-Sita’. This bedtime ritual, along with TV shows, movies and cartoons of the epic also offered me the opportunity to go back and revisit the text, which made many of the stories more ‘familiar’, not in the sense of knowledge, per se, but in the sense of recent recollections in memory.

The Ramayana and the Mahabharata, two of India’s best known classical epics, literally got a fresh lease of life in the late 1980s, courtesy, Ramanand Sagar and B.R. Chopra, whose adaptations of the epics on the small screen ensured that Sunday morning television viewing was never the same again. In fact, as Arvind Rajagopal argues in his seminal work Politics After Television, the rise of the BJP and of right wing politics in India can be traced to the telecast of these two serials, especially the former.