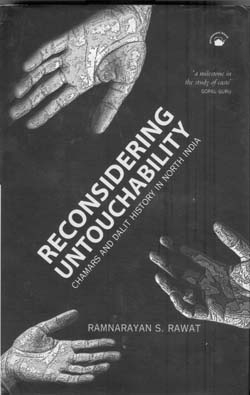 Chamars have emerged as an important political category capable of influencing larger electoral consequences in North Indian politics. It has been possible due to the ongoing struggle and movement in over a century inside the group. The present study looks into the historical records and points towards the less recognized alternative perspectives prevalent in Indian society. It successfully questions dominant historical narratives from the perspective of Chamars and dalit historical struggle against the domination of Hindu upper castes launched by the Adi-Hindu Mahasabha under the Leadership of Swami Achchutanand. Rawat provides a powerful critique of both colonial and nationalist historiography using the varied historical sources such as local vernacular press, ethnographic research, oral history, local archival sources and historical records etc. For instance, he has extensively studied the Chamars and dalit socio-political movements in the nineteenth and twentieth centuries in colonial north India. While studying the conditions and varied experiences of achhuts (Untouchables), Rawat neatly explores the manner in which untouchables faced social and political exclusion in the wider public domain under colonial rule due to their alleged traditional filthy occupation, though a majority of them did not pursue such occupations i.e., leather work in the case of Chamars.