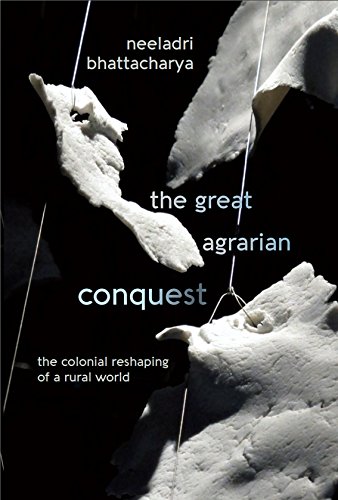 In its scope and style, this book is comparable to seminal literature in agrarian history such as Tzvetan Todorov’s The Conquest of America: The Question of the Other, and Charles Mann’s 1491: New Revelations of the Americas Before Columbus and 1493: Uncovering the New World Columbus Created which, like Bhattacharya’s deconstruction of colonial documents and literature, draw on the Spanish conquistadors’ reports and journals to describe the ‘settling’ of the Americas. The book also complements Indian agrarian studies especially works such as David Ludden’s The Peasant History in South India, and fills a gap in India’s agrarian history which has primarily focused on Bengal and Tamil Nadu. In drawing on administrative, social, and cultural categories by which British colonialism legitimized its conquest of a significant agrarian tract and socio-polity, Bhattacharya delineates a wide range of processes that made this possible. These include colonial disrupting, redefining, reifying, normalizing, displacing, legitimizing, and overall reordering and ‘re-shaping’ the Punjab as it was annexed from a Sikh principality/kingdom into becoming a key site for colonial expropriation of resources, which in turn led to a significant remaking of the region and its people.

Exemplifying new trends in inter-disciplinarity, Bhattacharya draws on cultural anthropological and literary studies to lend voice, presence, and cultural nuances to historical data. While the text itself is framed with the writings of colonial administrators, their narrative is interrogated by a sharp analysis that goes beyond subaltern historiography. Here we find a meshing of the voices of resisters such as Lalu, the poet, and details from the protagonists in legal cases that highlight the impact of colonialism’s reordering of Punjab society. Shorn of high theory and yet engaged with key theoretical perspectives, the book unpacks how power, culture, and ecology are intertwined and provides a worm’s eye view of how ‘…imperial power (could) be both uncertain and self-confident, stricken with self-doubt yet self-possessed… it could confront the opposition between norm and practice, between ideal and the corporeal’ (p. 57). In documenting how imperialism strategized to generate a range of categories, institutions, processes, practices, and life-worlds that were then normalized and made ideals, Bhattacharya’s titling of this as ‘the great agrarian conquest’ is justified. And it is in this, the significance of the restructuring of the Punjab becoming both the habitus of the people and official categories of colonial and later postcolonial administration, that has resonance for understanding contemporary rural India and focusing on these may enable us to better appreciate the value of Bhattacharya’s work.

The discontinuity of only one category and major transaction, that of land revenue collection, which was the central foci of colonial administration and the rallying point for much of the anti-colonial mobilization, also has significance in as much as it is the old landed elite, who now benefitting from the tax exemptions to land-based production, have grown into becoming the dominant castes and/or regional satraps who are now increasingly the entrepreneurial political elites.