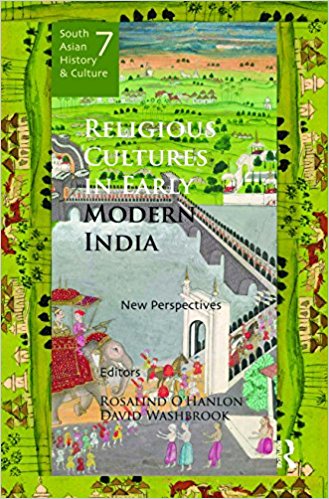 The collection of eight essays in this slim volume follows from a conference on the theme held in 2009 at Oxford. A strong running thread binds the volume together even as there is mercifully no overarching uniformity. The thread that runs through it places the various explorations of issues of religion/devotion/theology in their historical contexts. One common, among several, emphasis is the widening of the scope of ‘reference across many forms of religious culture, and the negotiation of more composite forms of religious identity’ (p. 7), detached from its conventional moorings in colonial knowledge and brought far back into the preceding Mughal era. Indeed, the editors are aware that the ‘negotiation’ is susceptible to even earlier trajectories, although the scope of the conference restricted their search to the Mughal period. Interestingly, barring the first essay, ‘The Debate Within: A Sufi Critique of Religious Law, Tasawwuf and Politics in Mughal India’ by Muzaffar Alam, all other essays deal with problematics internal to Hindu ‘religious culture’; whether this is by accident or design is unclear from the Introduction. An accomplished piece of research and writing in itself, its placement along with the other essays marks it out as somewhat odd, even as its line of argument coheres well with that of the rest of the contributions.