Reining in the Upholders of Law 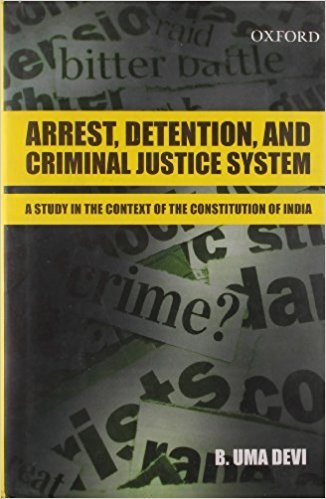 Reining in the Upholders of Law
Mahtab Alam
ARREST, DETENTION, AND CRIMINAL JUSTICE SYSTEM: A STUDY IN THE CONTEXT OF THE CONSTITUTION OF INDIA by B. Uma Devi Oxford University Press, 2013, 386 pp., 895
August 2013, volume 37, No 8

Arrest and detention are considered as routine and necessary procedures in any criminal justice system. In fact, it relies heavily on it. Chapter five of the Criminal Procedure Code (Cr PC) of India deals with the arrest of a person, while Section 41 is the main section that provides for situations when the Police may arrest a person without producing a warrant. There is an established procedure of arresting someone accused of or suspected of committing some crime. But, in most of the cases, what we see and hear is that while arresting an accused most of these established norms are habitually violated and often these arrests are either politically motivated or arbitrary in their nature. In this regard, the fundamental problem lies elsewhere as the writer of the book under review rightly points out. According to the writer, B. Uma Devi, who is a lawyer by training and practice and has a PhD in Law and is an independent researcher, after the enactment of the Constitution, a revamp of the system framed during the Imperial era was required as it was not appropriate for a country with a Constitution that guaranteed fundamental rights. But that unfortunately, was not done. ‘In effect, the criminal justice system which relies on “arrest and detention” powers of the state—power to arrest and detain as a pre-trial, punitive, and preventive measure—has remained unaltere,’ she notes adding, ‘Consequently, the state, to this day, notwithstanding the prescriptions of the Constitution and the judicial pronouncements, is using these powers with impunity. This state of affairs, no wonder, buttress arbitrary, unreasonable, unjust, and illegal exercise of arrest and detention powers.’ And most regrettably, ‘the worst affected are the poor, the illiterate and the ignorant’.