A Family in Search of a Law 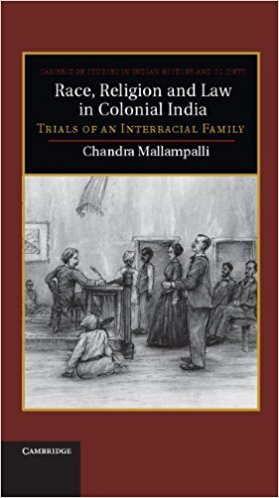 A Family in Search of a Law
Namrata R. Ganneri
RACE, RELIGION AND LAW IN COLONIAL INDIA: TRIALS OF AN INTERRACIAL FAMILY by Chandra Mallampalli Cambridge University Press, 2013, 268 pp., Price not stated.
August 2013, volume 37, No 8

One of the most enduring myths of the founding of the city of Calcutta (now Kolkata) is that of the rescue and subsequent marriage of the Englishman Job Charnock to an Indian woman. Marriages between Europeans and Indians were not quite uncommon in the early colonial period, most famously chronicled by William Dalrymple in his White Mughals. While unions between elite Indian women and well placed Company officials, and their interracial families have been represented and researched, the subcontinent has had a longer legacy of the creation of a class of people of mixed European and Indian descent variously called ‘East Indian’ or ‘Eurasian’—emerging out of the contacts between the Portuguese and Indians. This book brings to life not simply the romance of interracial unions, but traces the afterlife of such unions.

Chandra Mallampalli unravels the travails of an interracial family in Bellary, located near the border of the current south Indian States of Karnataka and Andhra Pradesh. The story is accessed through the celebrated court case, Abraham v Abraham, that began in May 1854, in the Bellary District Court, taken to the Madras Sadr Adalat and finally concluded in the Judicial Committee of London’s Privy Council in June 1863.