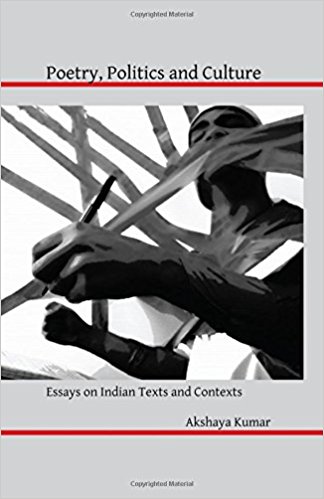 Poetry, lest it should sublimate into a rarefied expression beyond the possibilities of participation, needs to be recovered from the excesses of soulful profundities. If the ‘novel’ de-escalates the epic imagination, poetry in its march in the domain of the secular, too peels off the sedimentations of sublimity. Akshaya Kumar’s book, Poetry, Politics and Culture: Essays on Indian Texts and Context, is a significant critical intervention in the domain of poetry in this sense. In re-theorizing poetry in a potentially controversial manner, it endeavours to rescue it from those solemnities of the sacred and the serious, which once lent it authenticity, authority and appeal. The book covers the trajectory of Indian poetic imagination from its ‘quasi-originary’ nationalist longings to its hazardous engagements with the politicized subaltern. Such a ‘fall’ from the pedestal, the author argues, is actually a position of ‘gain’ from the embattled postcolonial perch. Instead of reclaiming poetry as ‘the’ discourse of culture, the emphasis is on re-defining it as one among many other compatible discourses of culture.

Divided into three sections ‘Mapping Nation/ Post-nation’, ‘Re-writing Culture’ and ‘Disseminating Dissent’, the book attempts several things in one go beyond the scope of routine literary criticism. As the author argues for an interventionist role of poetry in the making/mapping of the nation, he holds that poetry provides enabling coordinates of the nation, its spillage and splintering in the volatile 90s. Instead of being a discourse of temporal depth marked with the anxieties of prefiguring and fulfillment, the poetry of the 90s is poetry of spatial heterogeneity that transgresses and trespasses into zones beyond the nationalist gaze. Pavements, red-light areas, riot-hit lanes, border check-posts, concentration camps, terrorist hide-outs, prison-cells constitute the preferred new address of the poetry of 90s. As a corollary to this argument, the second section of the book underlines that poetry is not an incantatory iteration of the mantric past; as it divests itself from its burdensome epic ancestry, it re-writes culture in ways that are non-conformist, and even rebellious. Poetry, as it percolates down, becomes accessible to people from below, both in terms of authorship and readership; it becomes a medium of dissentual culture. The book, in a way, heralds the possibility of an activist poetry that turns towards its people, lending agency to their aspirations. Poetry of the 90s, as the author points out, is no longer a check list of wishful prayers, soothing lullabies, saturnine dirges, reflective sermons, maudlin lyrics; it strikes new forms which could be as eclectic as the ‘pugmarks of tiger’ or ‘postcards from god’.

The complex trajectory of the argument is sustained through a comparative study of Indian poetry in its potentially ‘three’ national languages—Indian English, Hindi and Punjabi. One stream of poetry provides a critical context for the other, and the author working within the ethics of comparative criticism shies away from privileging any one stream. Most of the essays combine the three streams of poetry in a carefully differentiated homological frame. Sarojini Naidu, Mahadevi Verma and Amrita Pritam, for instance, provide a homological axis of nationalist woman poetry, Lal Singh Dil, Omprakash Valmiki and Namdeo Dhasal provide another homological frame to understand the emergence of pan-Indian dalit poetry in the 90s. Kabir as a poet travels in various languages and genres; Mira as a saint-poet too is a common legacy which poets from all the three languages re-write in their own distinct ways.