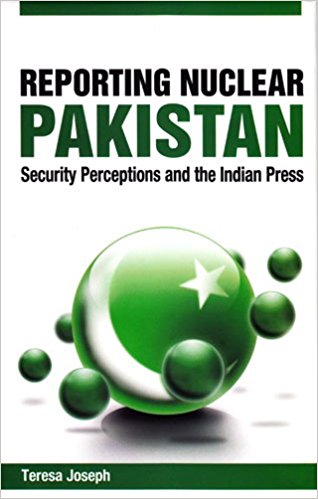 The 26/11 terrorists attack in Mumbai witnessed among other things, a deluge of voices criticizing the Indian media for its coverage of the terror attack. The media was particularly slammed for sensationalizing the news through live coverage of the attacks on the Taj and Oberoi Trident hotels and for creating, if not reflecting, a (public) mood, of warmongering and most importantly, for not questioning the Indian government’s theory of Pakistan’s involvement in the terror attack. In any given situation, the media is the main source of information and therefore, ‘objective journalism’ is demanded, or so it has been argued. Teresa Joseph’s book comes at a time when the debate on the method and quality of dissemination of information by the media is still fresh post-26/11. Joseph explores the critical role played by the Indian (print) media in shaping the views of its people vis-à-vis Pakistan and its nuclear programme. Through a rigorous research based on the content analysis of leading Indian English language dailies the author investigates the nature of security discourse in the Indian press in reporting ‘nuclear Pakistan.’

In particular, Joseph highlights media’s over-reliance on the government establishment for information on Pakistan’s as well as India’s nuclear policy. The central argument brought out by the author is that the perceptions of the (Indian) press in the nuclear context of South Asia (especially that of Pakistan) have essentially reflected the ‘dominant discourse’ (p. 311).

According to the author, the dominant security discourse in India is of the opinion that the main source of threat to the country arises from external forces which also ferment trouble within (p. 338). Both India and Pakistan have an arms buildup to ensure their security and threat perceptions relating to military balances and imbalances, and territorial concerns are given the highest priority (p. 338–339). The approach to security, therefore, is based predominantly on the realist state-centric paradigm (p. 338). In this process, negative qualities of threat and danger are attributed to the ‘other’/Pakistan and it is this realist security approach that is projected in the mass media. This dominant discourse guild consists, of course, of the elites including the government and political parties but more importantly the bureaucrats, diplomats, military personnel, scholars from the think-tank community, academicians/intellectuals specializing in international relations/strategic and defence studies, and journalists who come together to form the ‘strategic community’ that influences and shapes the policies of the government.