A Journey of Discovery 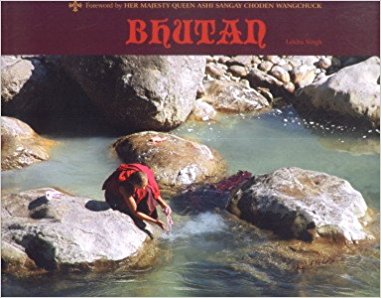 The book Bhutan, a rich pictorial depiction of Bhutan’s history and culture by Lekha Singh is an excellent presentation of the country’s identity. This richness is reflected vividly in the brilliant photographs. Obviously, Lekha Singh was on a journey to discover the real Bhutan as it has existed over the centuries as a Buddhist country before it changes and adopts modern ways. Since the book is a pictorial depiction, the narrative leaves some vital gaps in the history of the nation-state. It jumps from the 8th century ad, an advent of Vajrayana Buddhism through Guru Padmasambhava, an Indian Buddhist sage through Tibet, to Ngawang Namgyal, the political mentor in the 16th century when Bhutan’s Druk ethnic grouping coalesced to emerge as a nation-state with a defined geographical structure and a dual system of governance combining the two centers of power, the laity and monks, as the Zhabdung. Ngawang Namgyal emerged as the founder of the nation state called Druk Yul, the land of the Drukpas or commonly known as Bhutan.

Since the book is a cultural history depicted through photographs, the gap of eight centuries cannot be covered adequately. In any case, this was a period of turmoil and tribal sectorial conflicts with no identifiable political status. However, the various Buddhist sects which migrated from Tibet and settled in various parts of Bhutan with their own cultural and religious identity left a deep impact on Bhutan’s emergence as a nation. In fact, the developments of the 16th and 17th century was a consequence of inter-sectoral rivalry when the Drukpa leader Namgyal emerged as the victor and a ruler of Bhutan establishing the hold of the Drukpas which prevails today.

The temple frescos, the architecture, the dances and the profiles of the people are rich in content and convey the unique culture of Bhutan as it has emerged through history. Though the Drukpas came from Tibet, over the years this culture acquired its own character moving away from the Tibetan content and an identity emerged that was unique to Bhutan. Many local traditions were adopted with the merger of Bhutan’s ancient Tantrik rituals. Some of its traditions were incorporated. The concept of the power of Mahakali and Mahakala and their union is a source of power protecting the faith against all evil forces. The author says: Many members of the audience may not understand the deep Tantrik symbolism which underlines some of the dances, like the Dance of the Black Hats or Dance of the Lords of the Cremation Grounds, but the Bhutanese believe that so profound is the spiritual content of these dances that the mere act of seeing them has redemptive power.

Many of the artistic and traditional contents reflected in Lekha Singh’s selective photographs bring out Bhutan’s identity as it evolved since the 6th century which saw the Tibetan incursions with each Buddhist sect asserting its religious identity and monastic control. As these sects started establishing their hold in various parts of Bhutan, they tried to incorporate local traditions into their brand of Buddhist philosophy. This was reflected in the art and heritage of the district areas of Bhutan. It was only in the 17th century that a national identity emerged with a new cultural and religious dimension.

Bhutan is a diverse nation with distinct cultures. The west, central, southern and eastern Bhutan included different ethnic identities with their own traditional dress, food and religious practices. It was no easy task to integrate the country into a Drukpa culture which now is the strength of Bhutan as a nation of ideas and values. Lekha Singh has done a great service in identifying this new aspect of the country through her exposition.

The contents of the book however miss the important aspects of these differing cultures and their merger via an evolutionary process. The two segments which are extremely important and constitute Bhutan’s national integration over the years namely, the eastern Bhutanese and people of Nepalese origin in the south have not been covered adequately. Their contribution through their diversity is significant and no book on Bhutan would be complete without identifying these.

Lekha Singh depicts Shakyamuni’s contribution to the culture of the region. Siddhartha leaving his abode as the prince seeking Nirvana to his reaching the state of enlightenment under the Bodhi Tree and then re-emerging as the Buddha of the common man portrays the transformation from renunciation to a teacher of the universe sharing and resolving the pain of others. The fresco showing the Shakyamuni sitting under the Bodhi Tree on page 51 depicts the Buddha’s struggle for the renunciation of human desires. The paintings on page 53 depict Buddha crossing the barriers of self-enlightenment to becoming a preacher. This meant that self-enlightenment of the Shakyamuni served no purpose. He had to share the feelings of joy, sorrow and emotions of the common man to enable all to achieve enlightenment. That is how Buddha’s teachings were defined in the Lotus Sutra. The Shakyamuni’s own personality changed to a vibrant and youthful teacher of the universe so clearly reflected in this fresco.

Bhutan has maintained the essence of the spiritual and religious philosophy of Buddhism and has applyed it to modern times.

B.S. Das a former civil servant,is with Fairwood Consultants,NOIDA. He was posted in Bhutan as India’s first ambassador to Bhutan from 1968 to 1972.