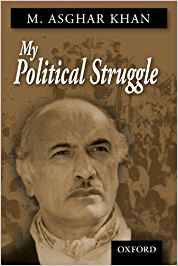 Air Marshal Asghar Khan (retd.) has written extensively about the political developments in Pakistan since its inception in 1947. He had the advantage of a ringside view of history and was himself a participant in many of those developments. He is liberal and broadminded in his outlook. One of the books that Asghar Khan edited which reflected his ideology and his worldview is The Pakistan Experience: State and Religion. In the introduction of that book he stated that Islamic history, from as early as the prophet’s time has seen a struggle between the progressives and reactionaries. Both have tried to interpret Islam in the light of their own understanding and their own interests. He goes on to say that there have been social tensions and contradictions in the Muslim world, between modernists and progressives on one hand and fundamentalists and reactionaries on the other, between masses and feudal elites, between forces of enlightenment and obscurantism and between living modern cultures and mediaeval traditions. Asghar Khan has been committed to democracy, human rights, rights of women and concern for the poor and the weak.

Combined with his philosophy had Asghar Khan been able to play a greater role in politics and society Pakistan could have avoided the many social and political crises that it is facing today. Asghar Khan’s tragedy was that he was unable to carry the masses to succeed in the electoral field in the race for power.

The first Pakistani commander of the new country’s air force at the age of 36, Asghar Khan retired after completing four years as air force chief, just a few weeks before the 1965 India Pakistan war. He entered the political field almost simultaneously with Zulfikar Ali Bhutto though there was a vast difference between them in their ideals and objectives. This was reflected by the remarks Bhutto made when he invited Asghar Khan to join the Pakistan Peoples Party. When Asghar asked Bhutto about the programme of his party Bhutto replied that people were fools and his programme was to make a fool of them. Bhutto came from a feudal background and had the typical contempt of that class for the common man. Bhutto’s father was reputed to be the richest landlord of Sind. Both the leaders had powerful and charismatic personalities. Both founded political parties which attracted large sections of the people of the country. Asghar Khan founded his party called the Tehrik-i-Istiqlal on the eve of the 1970 election but he lost the election.