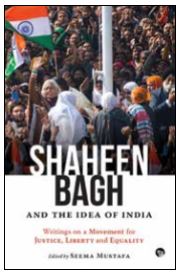 Reclaiming Plural India
Hem Borker
SHAHEEN BAGH AND THE IDEA OF INDIA: WRITINGS ON A MOVEMENT FOR JUSTICE, LIBERTY AND EQUALITY by Seema Mustafa Speaking Tiger, 2020, 256 pp., 450.00
April 2021, volume 45, No 4

Shaheen Bagh protests began on 15 December 2019, three days after the passage of the Citizenship (Amendment) Act (CAA) which, in conjunction with the proposed nationwide National Register of Citizens (NRC), posed the threat of excluding scores of Muslims from Indian citizenship. Within a few days the number of protestors swelled and Shaheen Bagh garnered global media attention as one of the longest on-going protests against the CAA, NRC and National Population Register (NPR). The supporters of the CAA questioned the legitimacy of Shaheen Bagh—touting the protests as ‘anti-national’, as ‘conspiracy’, as ‘gathering of traitors’ to hijack the new citizenship law the purpose of which was to weed out ‘infiltrators’. The book under review, Shaheen Bagh and the Idea of India, offers an alternative view. It brings together interviews, essays, photographs and ground reports in an edited volume that describes the significance of the 100-day Muslim women-led resistance as a historic civil rights movement that spontaneously erupted to (re)claim the secular, democratic rights of a besieged minority. The editor, Seema Mustafa, describes how Shaheen Bagh saw for the ‘first time in living memory’, Muslim women, long stereotyped as demure and caged, participate in direct political action, leading from the front.

The book is divided into three parts. Part one, ‘Ground Reports from the Protest’, details the evolution of the movement, the voices of the participants and the range of meanings—symbolic, spatial and political that the protest movement acquired. The five chapters draw from the field reports of journalists, researchers and documentary photographers covering the protests to evoke a strong sense of ‘here and now’.