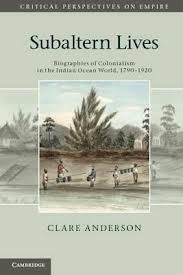 Subaltern Lives offers us much more than what it initially promises. It is not just a prospographical analysis of individual convicts, or about recuperating lives of marginal groups transported across vast spaces of Empire under conditions of extreme regulation and punishment, it is about methodology and the challenges of reading archives. Animated by the suggestions of Stoler and Cooper about reading the archive and acknowledging the differences and markers colonial experiences produced, the book looks at transportation and penal settlements, at categories such as race that was formed in a very particular mode and moment in the space of empire and finally at regimes of labour and punishment that helps us configure spatial networks quite differently across the maritime spaces of empire. Finally by adopting micro and life histories approaches, the book tracks down lives of unusual men and women whose paper trails albeit fragmented and occasionally discrete, enable us to complicate the idea of marginality and subalternity.

It proposes not so much to pursue the elusive authentic subaltern as to see subalternity as a social contingent process rather than a category and which in turn helps locate and understand the intersection of competing social identities—caste, status, ethnicity, even nature of offence—in the figure of the convict. This is done by tracking the life histories of key protagonists never forgetting the pitfalls of a biographical approach but accepting always and vigilantly the possibilities of allowing fragments to help piece a narrative on marginality within a colonial regime of labour and punishment.

The strategy works to great advantage. The eloquence of shards makes a case for modes of colonial record keeping and the methodological challenges involved in engaging with the kind of material that is at our disposal. The chapter on Dulla, a convict from Etawah transported to Mauritius for cases of theft and murder takes us through the making of the convict subject, the ways in which his life was sorted, classified and put into boxes, put to labour on public works and in the process testifies to the actual ways in which colonial archives broke up experiences and froze them into categories. On the other hand, the life story approach also raises the importance of convictism as an important stream flowing into coerced labour. The chapter that follows looks at the life story of George Morgan who was shipped off to Burma and identifies the points of exclusion and inclusion within the colonial scheme of convict transportation and how this produced racialized spaces of settlement within the empire—a white Englishman sent off to Australia, an African to British India and or to Southeast Asia. What is especially striking about the life and adventures of Morgan are the ways in which he escaped, was subject to trial on several occasions, persuaded the authorities of his European-ness. All these enactments demonstrated just how fluid and contingent social identities were in the world of the Indian Ocean in the 1830’s and 40’s even as certain geographies became increasingly associated with slavery and convictism.

The snapshot of Narain Singh, a political prisoner takes another even if interrelated set of concerns. What were the implications of the differential treatment accorded to prisoners and how did they intersect with colonial political economies of transportation? There are no clear answers to this except an allusion to the fact that Narain Singh became a constable at the end of a long cycle of incarceration and transportation—a shift that was made possible because of his association with British social rank and privilege. The more important question that is addressed in this chapter is why Narain Singh remained an obscure figure in mainstream Indian and or Punjabi history and why therefore telling convict tales is so important not just as a means of recuperating subaltern lives and their experiences but of helping us meditate on the history writing project itself that rests on exclusions and inclusions. This point is driven home again in the chapter on Liaqat Ali and Amelia Bennett whose life stories expose not just the elisions of latter day histories but of the cracks and complexities within the colonial edifice, of the compulsions and strategic decisions individuals and families had to constantly make in a changing political environment. The retrospective representation of Liaqat Ali matched by the deconstruction of Bennet’s testimony speaks to the importance of fluidity and contingency in social relations at a time when racial divisions were becoming more entrenched. The last chapter looks at Edwin Forbes, a convict guard who maintained a diary that provides us with glimpses of homosociality in a penal settlement.

What marks this elegant study is a close engagement with the nature and stylistic markers of a colonial archive, with the possibilities of recuperating marginal lives not simply to make a case for subaltern agency and authenticity but to open up ways of understanding the experience of empire, its cracks and limits. It looks closely and critically at testimonies and alternative family histories (the section on Bennett is especially evocative) to argue for a greater appreciation of contingency in history. What it does not do is to offer a more comparative set of insights across penal settlements in the Indian Ocean, on how these settlements worked in tandem and in contra-distinction around an imperial idea of difference and discipline. How far does the idea of the contingent really complicate the figure of the subaltern? It is a question that continues to tease.

Lakshmi Subramaniam is with the Centre for Studies in Social Sciences, Calcutta.