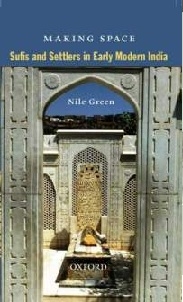 Nile Green is an unusually gifted historian. He has been engaged, almost single-handedly, in a quiet revisionism in the social history of early modern India. His work has served to introduce fresh perspectives to our understanding of early modern epistemology, bringing in dimensions of corporeality and embodiment to processes of knowledge formation. Moving between texts and spaces, his work unravels the mutually constitutive relations between them, with architectural spaces finding meanings in/through narratives, and vice-versa. All along, in his various writings, Green has demonstrated, with dexterity and astuteness, the embodied nature of knowledge formation, and its entangled and deep relations with identity formation and power relations.

In the work under review, Green explores the processes involved in the creation of sacred spaces in early modern India. Focussing on the ‘Muslim spaces’, in particular the shrines of the sufis, he argues that these spaces emerged historically in the context of a continuous movement of peoples across the Islamic landscapes, and served to provide to the settler communities in India a home away from home.

Rendering an alien landscape familiar, these shrines of saints were driven by a project of home-making, and for both the settler and convert communities, served to provide a shared historical memory. At the shrines, indeed, the bodies of the saints provided to the community of believers an embodied/corporal experience, but for these spaces to become ‘sacred’, providing renewed blessings (baraka) and guidance to the followers, it were the rituals and narratives that were so very crucial.

Focussing on the shrines in the Deccan, Green draws out the entangled relations between rituals and architecture, geographies and narratives in the forging of a sacred space. More specifically, he is interested in the correlations between texts and space. In exploring their correlations, his work deftly unravels what he terms as the ‘the textualisation of space’ and ‘the spatialisation of the texts’. Looking at the religious literature, in particular hagiographical texts of the saints, and their living representatives whom he calls, ‘the blessed men’, he cleverly draws our attention to the spatial dimension of knowledge, and the formation of meaning in space. This is indeed a significant insight, for it not only highlights the rootedness of knowledge in space, but also forces us to consider the role of body and senses in the acquisition of knowledge, for, after all, the text-space relations were bodily mediated, through affect-laden, sensory experiences. It is here that the rituals and music performed at the sufi shrines could, perhaps, be perceived as intuitive sources of knowledge, as well.

If the space moulded the narrative, the former was just as much shaped by the text. Space and narrative constituted each other. Focussing on the shrines in the Deccan, Green competently brings out the role of narrative in the forging of a sacred space. Here he looks at the multiple voices that were subsumed in the historical narratives, and distinguishing the different registers of their location, he deftly draws out the symbolic contestations between different social groups and communities that shaped the text-space relations in the sacred spaces in early modern India. One of the over-arching tropes that marked the narratives defining/defined by sacred spaces was the discursive integration of the shrines into a sacred geography, symbolically connecting them with the sacred spaces elsewhere in the Islamic world. To the settlers and the convert communities then, the shrines, with their narratives, provided a sense of belonging and a home, but also a historical memory that connected them to a sacred geography extending to Central and West Asia.

Green’s argument here makes an important intervention in intellectual history, for even as he studies the religious texts of the period, he deftly brings out the process of meaning construction in space. At the same time, if meaning was constructed in space, this was because it was mediated in/through the bodies of the saints and scholars, ‘the blessed men’. Within an anthropocentric view of knowledge then spaces, bodies and narratives were deeply entangled with each other, and together they constituted the early modern episteme of knowledge in India. At one of the places in the book, the author explores the shifts in epistemology, and succinctly brings out the imperceptible shifts in the knowledge formation. These shifts, imperceptible but still profound, actually provide an important, if still unexplored, backdrop to the construction of modern knowledges in India, which we have rather indolently attributed to the agency of the colonial state.

Green finds the space, rendered meaningful by/in texts, as imbuing a sense of identification and rootedness to the communities surrounding them. These communities of memory discovered their identities, and their sense of belonging, in the sacred geographies, but, more importantly, in doing so, they appropriated both text and space in contentiously articulating, defining and redefining their sense of identification and community ties. The memory of a sacred space was, therefore, an ever-changing one, and it is, as Green suggests, only within a dia-chronic frame of reference that the space-text relations need to be studied. The space was always invested with meaning in time. And, for the communities of memory, at least, the temporal constituted the spatial, and vice-versa. Here, it is important to bear in mind that the communities identifying themselves with a particular sacred space continually changed, and with the shifts in circuits of followers and patronage dispensation, the narratives/ texts surrounding them also changed, as well. Space-text production of knowledge was, therefore, an ever-changing and power-laden activity.

Identities are constructed, and continually articulated through acts of collective memorization (and forgetting). However, the sacred spaces imbibed and provoked multiple memories. In grappling with the multivocality involved in historical memory, Green looks at the oral narratives, as well. Deftly integrating the Persian and Arabic source material with oral and folk narratives, he argues that the sacred sites were often contentious spaces, and were marked by symbolic struggles by subordinate social groups aspiring to enhance their social status by identification with a particular saint/shrine. Consequently, the sacred spaces were usually suffused with multiple narratives, some Persian and Arabic, representing elite voices, others oral and ritualistic, emanating from the subaltern classes.

This is indeed a fine work of scholarship. Original and thought-provoking, it is marked by a wide reading of the extant source material, and, more importantly, a critical and creative apprehension of its evidence. Providing a whiff of fresh air to the historiography of early modern India, no historian of early modern India can actually afford to ignore it.

Farhat Hasan teaches in the Department of History, University of Delhi, Delhi.