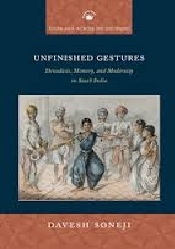 Unfinished Gestures provides a gentle, poignant and painstakingly detailed account of the complex processes whereby women who participated and continue to participate in what Soneji classifies as non-conjugal relationships have been marginalized. While some scholars have tried to move beyond the binaries of the celebratory and the condemnatory in their analyses of the devadasi tradition, what sets Soneji’s work apart is his careful disaggregation of spheres of performance and his fruitful deployment of interdisciplinarity in its richness. There are no superficial or quick resolutions or conclusions; instead, we are led through a web of tangled engagements and constantly reminded of the complicated worlds that devadasis both created and inhabited, as well as of the contexts within which these emerged.

The first substantive chapter focuses on Tanjore, an acclaimed centre for music and ‘high’ culture under the Marathas. Here, Soneji’s account takes us beyond the narrative of the collapse of these cultural practices with the onslaught of colonialism.

Instead, he draws attention to the ways in which performative practices were reconfigured in the aftermath of annexation, and became sites where links were forged between native and colonial elites. In the process, we are provided with a detailed exploration of performative contexts. He also underscores the ways in which categories such as queens, concubines, servants and entertainers intersected and overlapped. These overlapping roles flow into and emerge out of the notion of spaces that were relatively blurred. For instance, both the temple and the palace provided sites for ‘marriage’, which was a moment of initiation. In drawing attention to these fluid boundaries Soneji persuasively establishes that many of these categories were shaped by aesthetic and material concerns. And, refreshingly, he refuses to deploy the categories of sakti or sau-bhagya, strength and auspiciousness, which have often been used by scholars attempting to rehabilitate the devadasi tradition.

Soneji also documents the ways in which the tradition of nautch was constituted as disrespectable, even as it continued to flourish. He draws on indigenous literary traditions, which circulated through print, to argue that these texts represented women performers as at once cunning and alluring, and consequently as disruptive of the moral economy of the patrifocal household. Besides, he highlights how European reception of such performers/ performances was often restricted to the visual—the aural aspects, including song and music, which were an inextricable part of the rendering, were often inaccessible to such audiences.< /p> < p>The reconstruction of the complex, intersecting milieus within which what Soneji designates as the tradition of salon performances emerged is fascinating. The discussion focuses on both the contexts and contents of javali performances, highlighting the intricacies that were put in place, disintegrated, and were reformulated in a range of performative situations.

The discussion on the anti-devadasi movement covers, in part, familiar terrain, charting the histories of criminalization, and the differential impact this had on men and women within the communities of performers who were brought within the ambit of various legislative formulations. Soneji underscores the ways in which men from these communities engaged in and staked claims to power and visibility within these new structures of power, while women who did not adopt the valorized route to ‘reform’ through marriage, were increasingly subjected to marginalization if not active criminalization. The author traces the ways in which women classified as devadasis were stigmatized through the deployment of medical, legal and educational discourses that were shaped partly by the concerns of the colonial authorities, even as these were represented as echoing and respecting ‘native’ sentiments.

Soneji highlights the twists and turns of the debates around abolishing the institution of the devadasi, pointing out how various individuals and groups claimed to represent the ‘authentic’ tradition, decried its degeneration, and worked actively towards shaping new sexual and social practices that were thought to be in consonance with colonial and postcolonial modernity. At the same time, the author is careful not to homogenize or romanticize those who opposed Muthulakshmi Reddi and others who advocated abolition of the institution. He points out how the concerns of those who wanted to retain the institutions and practices that were now assimilated to the category of devadasis were often inspired by conservative ideals, even as some of those who were now labelled as devadasis opposed stigmatization on other grounds. Implicated in the debate were claims and counter-claims to protecting what was represented as a threatened religious heritage, often stripping non-conjugal sexualities of their complex meanings. At the same time, also at stake were material resources, and the consolidation of patrilinies and caste identities that were particularly important for men. Soneji draws attention to the virtual absence of successful legal prosecution under the Devadasis (Prevention of Dedication) Act, but at the same time highlights how the legal discourse stigmatized those who were classified as devadasis.

Perhaps one of the most tantalizing glimpses of the complexities involved emerges in Soneji’s reconstruction of the shadowy figure of Yamini Purnatilakam, a practitioner of kalavantula, a cultural tradition of the Andhra region that was often equated with the institution of devadasis. Purnatilakam opted for ‘reform’ and yet was not particularly successful in carving out a visible independent space within the elusive framework of ‘respectability.’

Soneji guides us beyond the glare of the ‘red light’ areas through his piecing together of the narrative of Muttukkannammal, a woman who reconstructed her aesthetic practices with a quiet intensity. The author ensures that his account is richly textured and contextualized, so that we are not left with an iconic figure, but with a far more tangible person located within a complex history. Even as he asserts that her individual memory, reconstructed through ephemeral gestures, are as important for historians as the concept of collective memory that has attracted far more scholarly attention, Soneji places her within a carefully historicized time and space, that of 21st century Viralimalai, a developing town in Tamil Nadu, famous for the Shanmuga-nathar Temple and as a traditional prostitution area.

The final substantive chapter engages with the heterogeneities of identities that women in non-conjugal sexual relations adopt, acquire, and learn to live with. In this context, the author draws attention to the diverse repertoire that constituted elements of the kalavantulu. As part of this exercise, he recovers the ways in which kalavantulu constitute the erotic and the sensuous, contrasting their practices with those of the householders or samsaris, even as he notes the ways in which the two are intertwined. In fact, throughout, Soneji meticulously documents the ambiguities and ambivalences that characterize quotidian existence in a situation where the very category of the devadasi or the kalavantulu is delegitimized. The outcome, he suggests, was an amalgam of circumstances: Devadasi disenfranchisement thus materialized through the cumulative social effects of social marginalization, legal intervention, misapplication of the law, and aesthetic loss (p.197).

If there is one irritant in this meticulously argued and well-produced book, it is the strategy of placing interesting material in the endnotes rather than as footnotes in the main text. Some of the notes run into paragraphs, and integrating them into the body of the text would have facilitated the task of the reader. That apart, Soneji leaves us with poignant reminders of the implications of modernity—in which Bharatnatyam is constituted and appropriated by Brahmin elites, some devadasis are carefully co-opted, but others, such as Saraswati, with whom Soneji’s narrative ends, choose or are consigned to anonymity if not ignominy. It is a sad story, but hopefully Unfinished Gestures also suggests that the story is still unfolding, and may take different, as yet unanticipated twists and turns.