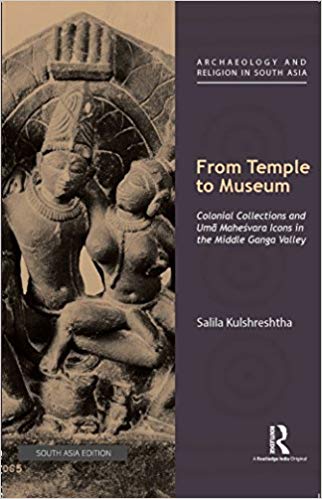 The present work is a result of a thoroughly revised and updated version of a doctoral thesis submitted to the Centre for Historical Studies, Jawaharlal Nehru University, New Delhi. Based primarily on the analysis of Uma Maheshvara icons that once adorned the temples in the middle Ganga Valley this monograph has been published in the Routledge Series ‘Archaeology and Religion in South Asia’. The contents of the book are divided into two parts: Part I contains two chapters and the entire collection of Uma Maheshvara images are discussed and put in context in the three chapters of Part II.

The introductory paragraphs clearly delineate the purpose of the study of Uma Maheshvara images in the present state of Bihar. The landscape was the cradle of Buddhism till the times of Palas and Senas who ruled Eastern India from the middle of the eighth century to the end of the twelfth century AD. Massive colonial interventions by the so called ‘British Oriental scholars’ during the nineteenth and early twentieth centuries brought significant changes in the location and re-location of sacred images, and consequently the sacred sites and icons both were re-configured and re-interpreted by curators and scholars working in this field.

Salila Kulshreshtha clarifies at the beginning of her study that this book aims to concentrate on three major issues: one, how to understand the sacred images; two, how to put sacred images in the social and material milieu of the period; and lastly, the colonial interpretation of religious shrines and images and how the study of monuments and a variety of artefacts was used by the British Oriental scholars for a creation of knowledge not only of Bihar’s past but of India’s past too (see, for example, Bernard S Cohn, Colonialism and Its Forms of Knowledge: British in India, Oxford University Press, New Delhi, 1977).