Of Modern Industry In India 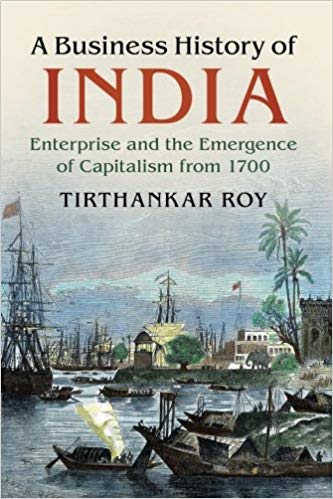 Of Modern Industry In India
TCA Srinivasa Raghavan
A BUSINESS HISTORY OF INDIA: ENTERPRISE AND THE EMERGENCE OF CAPITALISM FROM 1700 by Tirthankar Roy Cambridge University Press, 2019, 312 pp., 500
January 2019, volume 43, No 1

Few books that I have read in the last few years are as good as this one. For one thing, Roy writes surprisingly well for an academic and when the subject is as dry as business history this is an invaluable asset. But it is not just the style. The content, too, is entirely satisfying because it makes one want to engage with the author, who is as erudite as he is opinionated—and I don’t mean that in a bad way. He uses the method the Romans used to call ipsidixit—‘because I say so’—but again in an intellectually acceptable way. Overall, the book makes for an excellent account of the development in India of the thing called capitalism, a silly word if there was one. In the Indian context, as Roy inadvertently shows, it becomes even sillier.

The book covers so much ground that it is impossible to write about it all in the limited space available here. Suffice it to say that for anyone seeking an authoritative account of the development of modern industry in India after the Battle of Plassey this is not a bad book to consult. Not only is it the latest in a long line of such books, it also offers some new insights that are briefly described below. One other advantage of being the latest is that the reader gets two other benefits: a lengthy bibliography and short briefs about many of the entries therein. The fact that one of the persons to whom Roy explicitly acknowledges a special debt is Ashok Desai, whose clarity of mind is only matched by the breadth of his scholarship.

Of all the new insights and disputations that Roy offers, three deserve special mention. The first is that for a capital-scarce region, South Asia did very well when it came to building modern technology-based production facilities. The fascinating bits pertain to the way Indians adapted the European forms of business organization. I had always wondered why capital has always been scarce in India. Roy provides, at least for me, the first convincing explanation. He says it had to do with the monsoon. It was only during the crop season that finance became available because windfall gains could be made. And so great were these gains that at other times money was simply kept idle. This fits in perfectly with the busy and slack season credit policies of the RBI, now no longer in use. Yet capitalism flourished in India, which is paradoxical. One possible explanation for this, he says, is that India was open to foreign investment, to which it is closed itself after 1950.