Politics of the Personal 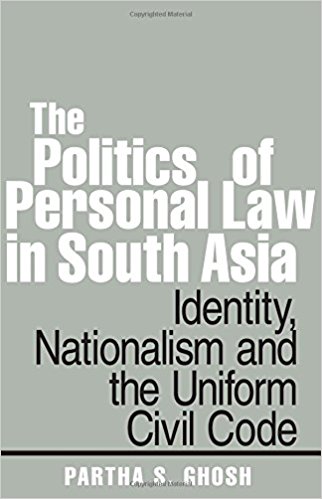 Asubstantive body of scholarly writings, especially from femi-nists, has contributed significantly to the debate on personal laws and the Uniform Civil Code (henceforth UCC) in South Asia. Much of this literature has framed the debate around a range of issues including those emanating from the ‘contact zone’ i.e., pertaining to the colonial history of the region and the interaction of European legal systems and indigenous customs, the colonial state practices and processes of institutionalization of state power; those that examine the continuities and ruptures in state practices of rule in colonial and Independent India, as well as others which have dealt with specific focus on particular periods, cases, or have raised philosophical questions regarding national identity and masked citizenship counterpoised with issues of community identity and differentiated citizenship.

Partha Ghosh’s study broadens the ongoing debate by addressing these concerns in a comparative perspective by looking at the South Asian experience as the overarching framework within which historical and contemporary inter-relationships may be examined and connected comparisons drawn.

While the basic premise of the book as Partha Ghosh claims at the outset is ‘a dispassionate analysis from a political perspective with the entire South Asian region as its focus’ (p. 2, emphasis added), the manner in which the political perspective unfolds is far from detached and dispassionate. By studying the historically emergent patterns of sameness and difference in the way in which state policies and discursive practices on personal laws and the UCC have unfolded in South Asia, Ghosh is able to explore the terrain through a fresh set of questions, and also offer provocative responses from a perspective which is not narrowly focused on the Indian experience.