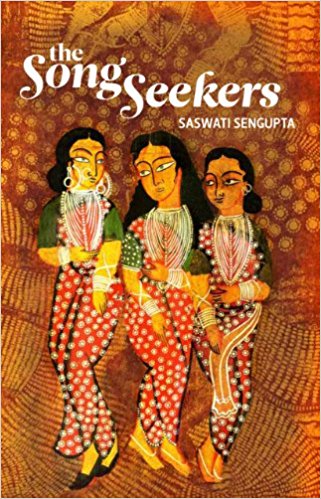 Uma, the protagonist of the novel, a young woman from a well-to-do back-ground with a modicum of higher education in Delhi, is married into an aristocratic brahmin family in Kolkata, and thereafter delves into its family history with an almost unhealthy curiosity. Uma’s unanswered questions get specifically provoked by the presence of an unexplained human fixture in the household—the so-called ‘pishi’ (aunt) with the green eyes, who has neither the status of a servant nor a member of the family. Pishi’s room in a dark little alcove between two floors signifies her marginality, as does her not being allowed to participate fully in the socio-cultural ceremonies of the family. Uma determines to get to the bottom of it all but is equally focused on reading and salvaging meanings from the scholarly heirloom of the family—an edition of the Chandimangal sutured together, selected and omitted from earlier versions by her husband’s great-grandfather.

The checkered histories of both the peripheral Pishi and the literary milestone merge in a dramatic discovery that almost fractures the conjugal bliss that Uma had hitherto taken for granted, which meant not only easily adapting to her husband but pleasurably soaking in the new ambience of the living space that has the imprint of three generations of her in-laws.

Uma’s preoccupation with the Chandimangal also triggers off an explosive realization that her own grandfather’s book that included the supposedly subaltern among the goddesses was rejected by her father-in-law’s printing press. Her growing uneasiness about this as well as her disquiet that ‘if print, potatoes and poets could have been accepted by the Bengalis, then why not a pair of green eyes?’ threatens even her relationship with her husband until it is healed by his challenging the norms of the family printing press that will not accept for publishing a book about the ‘other’ among the Calcuttans. Uma had believed for long that he was only interested in profit. The husband’s dormant, rebellious streak, therefore, strikes as somewhat abrupt and not quite carefully hinted at or fleshed out between the lines in an entirely credible manner. Pishi’s looks, location and lack of locus standi, indicative of ‘thereby hangs a tale’, on the other hand, comes full circle quite logically though unnecessarily tortuously. The intricacies of an extended family tree spanning so many epochs would be somewhat difficult to work out for readers who are alien to a culture that is so rooted in the web of the extended family.

The discursive endeavour of the novel is to question goddesses who represent a pedestalized elite, only accessible to the privileged and unearth some marginal goddesses handed down from folklore and rural legends who have consciously been undermined. Uma, who is made to aid and abet the latter agenda, also discovers that goddesses in the common people’s repertory can be defiant, belligerent or even ‘manly’ which is certainly not what the upper or middle class high caste urban elite wants its own women to be. Uma unearths such statistics that reveal female goddesses to be as capable of hailing from the peripheries of hunter tribes and the like as to independently take up what are normally believed to be ‘masculine’ activities and occupations in the world outside the home. The scriptural associations of myriad goddesses in the Hindu pantheon also do not portray them to be as docile and homebound as the female stereotypes created by the metropolitan, high caste upper crust of society.

Sengupta, an academic who has worked on the associations of female deities in Bengal commendably demonstrates a talent for mutating all her findings into a fictional form. Passage after passage of conversations among the ‘kitchen community’, ranging from the most uneducated and rustic to the most sophisticated and blue-blooded, express rage over the erasure of hunter goddesses and lower caste goddesses in the Chandimangal. The interspersed obscure verses that either provoke or endorse the outrage, however, pall now and then. Khema the household maid instigates Uma’s search for Ma Dombi, a low caste woman who was spurned by her husband yet evolved to be a deity and protector of the village populace. All the women hail the militant, powerful, armed goddess invoked during the national movement who slays a demon, visits a low born household and roams the forests and hills alone but is not designated a fallen woman.

The author validates Uma’s quest by narrating that she had always been interested in stories—the grandmother’s were more to do with gods/ goddesses/ mythological characters while the grandfather would regale her with modern narratives of heroic feats and adventure tales. Ironically, the same grandfather who tried his hand at writing and publishing a book called The Evolution of the Mother Goddess, pawns away his wife’s jewellery in the process but fails to get it published. The art of story-telling, therefore, becomes an important aspect of the book under review. Each section takes up the last motif of the previous section—e.g., rain or a book or a scolding from a mother-in-law, set in a different context to begin a new section, makes the transitions smoother. The story is sometimes told from Uma’s perspective (though in the third person) where she gradually gets partial answers to all her queries but sometimes told from the perspective of the omniscient narrator who knows all without making it seem jarring or destroying the suspense.

The national movement is referred to tangentially again in allusions to armed goddesses who were the icons of inspiration among activists like Uma’s mother-in-law Shivani’s brother who joined the terrorist movement. But on hindsight, Pishi’s insightful question ‘Will the lot of women improve after the gaining of independence?’ seems as relevant as the query of the child protagonist in Sibram Chakrabarty’s Baari Theke Paaliye when he asks whether the condition of the poor will improve if the country gains swaraj. This sceptical assessment of incipient nationhood, however, could have been followed in greater complexity although nationalism and its critique have been done to death in fiction from the early twentieth century to date. The ambience of Kolkata in the sixties is recreated here along with a well-researched history of jute mills, printing presses, the club culture of Kolkata and the Portuguese infiltration in Bengal. The significant chat around their indelible signatures, a major theme, is no less authentically woven into the tale as its purely fictional elements.