Putting the Ocean into a Jug 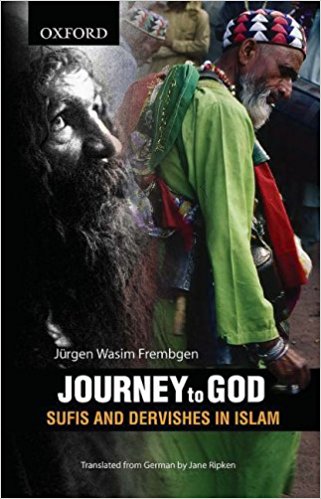 When Jürgen Wasim Frembgen set out to write this book he knew he was attempting the impossible. He was aiming in one slim volume to describe the external practice of Sufis and dervishes throughout the world, and from the dawn of Islam to the present day. In short he was trying to put the ocean into a jug. Being an Islamic scholar of repute and international standing, he knew the enormity of his task. Undeterred, he has succeeded in presenting a kaleidoscope of Sufi tradition that displays the extraordinary diversity that has existed and still exists in the popular and mystic religiosity of the Islamic world. Only one or two things jar in Journey to God. The translation from the original German contains many references to the ‘Indo-Pakistani Subcontinent’ and ‘Indo-Pakistan’.

These terms are plainly ridiculous. Would anyone refer to Franco-Germany, for example? Couldn’t the editors have just said India and Pakistan? And if Frembgen found the term Indian subcontinent politically incorrect, it was even more incorrect to replace it with a term that ignores other subcontinental countries. ‘South Asia’ is the generally accepted alternative. Then there seems to have been some censorship.

Shunted into a footnote on page 189 is the sentence, ‘the original German text also does contain paragraphs dealing with the topic of sexuality in Sufism. The interested reader is referred to the edition published in 2000’. Are we in 2009 returning to the 19th century when sex was considered taboo? Not that Frembgen entirely ignores the subject. He points out that some Sufi orders believe in sexual abstinence, while others advocate marriage. He also mentions one dervish group that uses sex as a way to God, and other male Sufis who have extended the concept of being the ‘bride of God’ to wearing women’s clothes and jewellery.