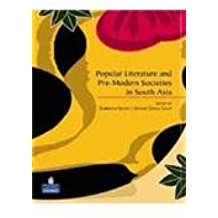 This is a book by historians for historians. This is not to deny the value of this collection of essays, which have come out of an academic seminar, but to state clearly wherein lies its quite significant value. Except for the two Pakistani contributors, one a Pushto literary scholar and the other an Area Studies expert, all other contributors to this book, which has nineteen chapters in all, are practising historians. The book starts off with the premise that literary scholars generally do not situate texts ‘in an appropriate historical context’. Ironically to buttress their argument about how popular literature should be read, the editors turn to Terry Eagleton and Raymond Williams among the other usual suspects from literary/cultural studies! But this is only a minor throwaway point about the fact that transdisciplinary scholarship (and this book even calls itself interdisciplinary) in our academy is not necessarily collaborative work that emphasizes the fuzziness of borders but one that crosses borders, which are often redrawn.

This book attempts to cross more than disciplinary borders and is quite ambitious in its scope. The papers in this book look at popular literature from different places in the Indian subcontinent, from the North to the South and the North-East to the West.

The essays and the introduction are worth reading, very often illuminative and always informative. The introduction is particularly useful in delineating the theoretical bases for the seminar and the book on this topic, demonstrating how local traditions, beliefs and rituals may tell quite a different story from that of traditional historians, be they secular or sectarian. The editors argue for greater nuancing than secular historians have seemed capable of so far in their need to keep conflicts out of a syncretic history of India. However, the interesting hierarchical difference between the myth, legend, and the folktale, which seems to be more of power relations than based on any aesthetic or philosophic or historic reasons, could have been looked at in the theorization because the very first chapter struggles with it for a bit. This is the first of many papers that show how legends and folktales very often collaborate in and consolidate state formation or sectarian policies and that therefore one cannot assume simplistically that popular literature need always be resistant or subversive in nature. Why this assumption should be made at all is curious; popular does not mean subversive automatically—after all no state could survive for long without the populace having or creating some kind of stake in it. In any case, popular literature is a way of negotiating and living with contemporary values and power structures. It needs literary skills to tease out other positions in these texts, but the overall message cannot be simply subversion or revolution. Moreover, most of the papers in this book deal with legendary characters and are thus still about histories of specific people with leadership qualities (though not chronicles of kings) and not about lives of common people. Thus even if the texts are oppositional, they are so in fairly conventional ways. This is obviously because most of the historians in this book want to deal with histories, alternate or subaltern, unverifiable or unreliable, but histories nevertheless.