Prospects Of Recovery In World Economy 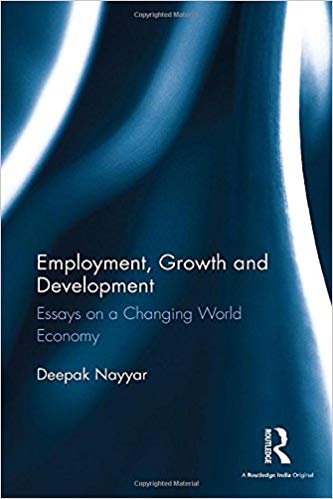 Burgeoning unemployment and the feeble prospect of recovery in world economy are undoubtedly the most pressing problems facing both developing and developed countries today. Coming at this juncture, the book under review by the well-known heterodox economist, Deepak Nayyar, is indeed a welcome read. The common theme running through the collection of essays, written between 2010 and 2016, is that of the centrality of employment in bringing about sustainable growth and development in the contemporary world. The book is divided into three parts: employment and development; growth and development; and development, polity and society, with the essays being grouped into these three thematic clusters.

The first set of essays provides a macroeconomic perspective on some of the critical issues plaguing world economy and explores the challenges and the possible solutions to deal with these problems.

The first chapter of the volume examines the impact of the global financial crisis on developing countries and argues that the crisis provides an opportunity for rethinking macroeconomic objectives so as to make outcomes more conducive to development.

In this context, the author argues that developing countries such as China, India and Brazil could weather the crisis better compared to other countries because they were relatively more restrained with regard to financial sector liberalization, had a large home market and adopted countercyclical policies to counter the effects of the crisis. The experience of these countries provides important lessons for other developing countries in reorienting their macroeconomic policies and objectives.

Regarding the prospects of recovery in world economy, Nayyar contends that the situation remains bleak as most of the industrialized countries have gone back to adopting orthodox policies after the initial adoption of countercyclical policies. Return to the same set of policies that led to the crisis in the first place will not help in bringing about recovery that is sustainable. The only way to achieve sustainable recovery is by progressively eliminating global imbalances. Since global imbalances basically reflect gaps between income and expenditure and the skewed distribution of income, he argues that sustainable recovery requires reducing economic inequality within countries. That in turn requires raising the share of wages in GDP and making full employment the primary objective of macroeconomic policies. While international collective action is imperative for achieving this, the author also concedes that ‘the willingness and the ability of governments to coordinate, in terms of implementing such collective action, are not quite there’ (p. 26). However, he feels that the increased economic significance of developing countries provides an important window of opportunity so that, ‘even in the current world of unequal partners, these developing countries as a group could exercise influence to reshape the rules and institutions that govern the global economy.’

In the next essay the author states that employment is the key to providing a sustainable solution to the twin problems of slowing growth and rising economic inequality afflicting world economy in the post-crisis era. It elucidates how globalization and the quest to be more price competitive vis-à-vis rival countries, among other things, have led to the phenomenon of jobless growth all over the world. The obsessive focus of orthodox macroeconomics on the supply side at the cost of completely ignoring the demand side means that wages are only seen as cost and not as income. It is, therefore, no surprise that the era of globalization has been one of wage repression and low employment growth. This in turn has also dampened output growth through the worsening distribution of income. In such a scenario achieving sustainable recovery, the author contends, requires placing ‘full employment centre stage once again as the primary objective of macroeconomic policies, in both industrialized countries and emerging economies’ (p. 40). For, ‘it is only increased employment that can provide a sustainable solution to the crisis and in the process deliver growth with equity’ (p. 40).

The discussion on the link between macroeconomics and human development is interesting for a number of reasons. The author takes the view that while it is known that macroeconomic policies impact human development, what is often missed out is that the direction of the causation runs both ways. While the former link is known, the latter is rarely explored explicitly in the literature and hence the discussion can be very useful for students and researchers. The other interesting aspect of this essay is that it shows how employment (or the lack of it) plays a central role in determining whether the impact of macroeconomics on human development and vice versa, will be positive or negative.

The second part of the book covers a wide range of issues related to the rising significance of the global South and the implications it has for the world economy in general and developing countries in particular.

In ‘The Emerging Asian Giants and Economic Development in Africa’, the author is of the opinion that the rise of the two Asian giants—China and India—will have important implications for economic development in Africa. The implications can be either positive or negative and will depend on whether economic growth in these two countries is complementary or competitive to economic growth in Africa. Other than this, the growing presence of China and India can also help to reduce the dominance of the West and their influence on African countries. This would provide the African countries with more choices, options and space to evolve their own strategies for growth. However, if the economic engagement of the Asian giants with Africa, particularly that of China, perpetuates the old North-South pattern of trade, it would inhibit rather than foster development in African countries.

In the last chapter of the section, Nayyar provides a fascinating account of the evolution of BRICS and the reasons underlying its rise in the world economy. He argues that the importance of BRICS is not limited to the sphere of economics but extends to the realm of politics as well. He feels that while the economic importance of BRICS is yet to play out fully, it is already discernible in the realm of politics. Saying that it is difficult to envisage how reality will unfold in the time to come, Nayyar takes the view that coordination and cooperation between these countries has the potential to even exercise influence on multilateral institutions to ‘reshape rules and create policy space’ for developing countries.

The final part of the book comprising two chapters looks at select aspects of polity and society to explore the intersection of globalization with democracy and discrimination respectively.

While many of the arguments are known, particularly to those schooled in heterodox economics, it is still worth repeating them. If not for anything else, simply for the reason that it challenges orthodox economic thinking which lie at the root of the present crisis facing the world economy.

One point to note however is that there is quite a bit of repetition in the arguments as well as the examples used in some of the chapters. This can be quite disconcerting for the reader, even when appreciating the author’s point that some overlap may be inevitable and even necessary.

Having said that, what makes the book particularly valuable is that it covers a wide gamut of complex issues that confront world economy and attempts to tie all of it down to enable a better understanding of the prospects and challenges facing the world today.