Profile of an Institution 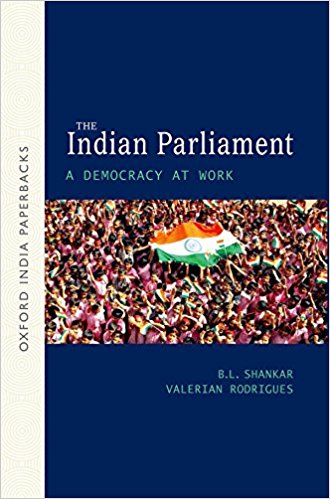 If we exclude the descriptive and institutional studies of the formal-legal variety, scholarship on legislative institutions in India would actually look threadbare. For a large number of students of Indian politics, obviously influenced by the behavioural revolution, institutions have simply not mattered. Consequently, studies of institutions have been rare and this has impoverished our understanding of political institutions and processes in India. B.L. Shankar and Valerian Rodrigues attempt to break new ground by directing our attention to one of the key institutions of India’s repre-sentative democracy, the Indian Parliament. The authors claim that they are principally contesting the Parliament is in ‘decline thesis’ (p.6). Examining the working of Parliament they conclude that it has actually performed a far more important role than what its critics have conceded. Like early studies of legislatures in non-western societies, this study is based on a traditional functionalist assumption that if an institution continues to exist without performing particular ‘expected’ roles, then it must be performing some other role useful in that political system (Mezey 1983: 512).

In line with this (unstated) assumption the book argues that, even if Parliament in India falls short in terms of its expected role or performance as the ‘decline thesis’ would indicate, it nevertheless has succeeded as a representative body.
A bulk of the book is devoted to substantiating the point that as a body of representatives, Parliament has performed an immensely valuable role which has aided the ‘process of broadening and deepening of democracy’ in India (p.7). The authors identify four dimensions of representation including changing social composition, changes in the conception of representation, shift from English as its mode of expression to assertion of regional languages and the change in the conception of the nation (p. 15). In their analysis of each of these dimensions, they compare nine Lok Sabhas, in three different periods, the 1950s, 1970s and the 1990s. They link the changing notion of representation in Parliament during the different periods with the social and political transformation that is taking place in society.