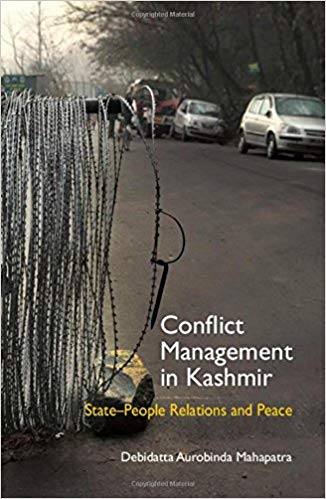 Debidatta Aurobinda Mahapatra makes an enquiry into how vertical aspects of the Kashmir conflict could be contained to nurture a constituency of peace in Kashmir. He utilizes the protracted social conflict framework in understanding the Kashmir conflict and makes a point that New Delhi needs to nurture a constituency of gainers for transcending the stalemate. Developing a framework through protracted social conflict (PSC) theory for exploring behavioural and structural, overt and covert, internal and external sources of conflict, he argues, for greater acknowledgement of non-material group needs. The non-material needs include security, recognition and opportunity for political participation.

The protracted social conflict in Kashmir is characterized by a vertical relationship between the state and aggrieved community, due to non-fulfillment of non-material needs. Mahapatra states that the non material need of political participation did not factor in the state policies leading to the separatist movement. Through this theoretical premise, Mahapatra heads on to enquire how intra-Kashmir trade and trade related policy making deals with the vertical nature of the conflict. The author approaches the question of the role played by intra-Kashmir trade in conflict mediation through extensive fieldwork conducted over a long period of time. He argues that border opening for trade has accrued economic gains for a group of alienated Kashmiris thereby leading to a constituency of gainers. The gainers can be useful as they prefer peace in order to continue extracting benefits, as against the spoilers for expanding a constituency of peace. The larger questions the book looks at is how far the economic gains of the cross border trade addressed the non-material needs of the Kashmiri community.

The strength of this book lies in the intricate field work details, conducting interviews over the years with people across the spectrum. Mahapatra has tried to go beyond the easily accessible trade union narratives and that reflects throughout the book. While discussing the trade initiatives and the implications for conflict management, Mahapatra brings to fore the factual details and the broader debates within the intra-Kashmir trade opening and engagement. Through factual details like trade was based on barter system, the cap set by the government on trading days and the heavily securitized trading climate, a reader is able to make sense of the eagerness of the trading community to trade despite major roadblocks. The fact that the traders continued despite the outright rejection of initiative by separatists and major communicational shortcomings between traders and the policy makers speaks volumes about the eagerness of the traders for continuing the trade. The communication between the two was based on exigency of the situation rather than a particular fixed guideline. This book also brings to the fore how there was virtually no impact of the input given by the traders on policy making. The traders continued the trade without the bank, with lack of communication with their counterparts on the other side of Kashmir, lack of response from policy-makers indicating how this constituency was seeking inclusion in whatever possible way.