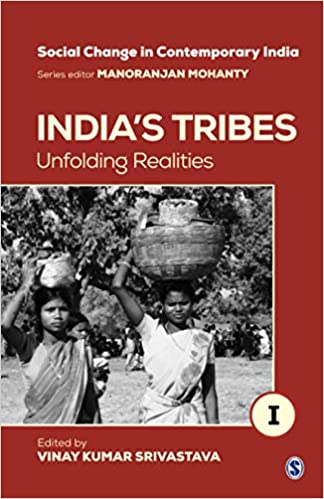 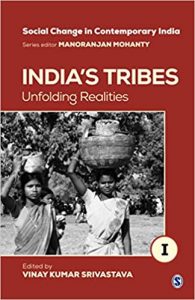 Studies on tribes range from colonial misrepresentation to critical processes of identity formulation against forces of dispossession. The most recent trend, however, is that of self-representation and search for adivasi epistemology[1]. Though tribes of India are no longer considered a stagnant community, the more we know about them the more we feel the need to know them better. This means that one can establish a sort of dialogue between the multiple writings on tribes and still say something fresh. The collection of essays in this volume also tend to fit this trend; first, by telling something which already exists in the common parlance and second, by bringing some fresh reflections. India’s Tribes: Unfolding Realities is a collection of thirteen essays published in the journal Social Change over the past fifty years ever since the journal was started in 1971. The volume starts with an elaborate introduction by Vinay Kumar Srivastava, a well-known social anthropologist, where he makes several remarks about the studies on tribes. Noteworthy among those is that ‘today a tribe is more a political category than a cultural one’ and there is a growing need to understand their daily lives rather than the peculiar practices, habits, beliefs, and customs which have found a central place in academic descriptions.

Srivastava makes an important observation so far as historical representation of tribes is concerned by saying that the history of pre-literate societies was supposed to be based upon oral tradition ‘entangled in conjectures, untenable and unscientific statements and thus unscientific’. But we have to understand that history writing even in literate societies does not seem to be very scientific and objective at least in this part of the world. Irrespective of oral or written accounts we can notice abundant myths and fables in ancient literary sources of India. Besides this, the search for an authentic historical account is understood as a ploy to extend the superiority of one knowledge-system over another. Historians working on tribes are now making use of very unconventional resources like village names, sacred groves, burial sites, and so on in addition to the ill-managed archival resources in district record rooms. While this exercise of history writing is not monumental in nature it presents a logical account of the people studied and can be largely considered as ‘archaeology of knowledge’, to use Michel Foucault’s phrase. Srivastava himself acknowledges that an important finding of the People of India project is that ‘almost every tribal community has preserved a rich folklore of their migration from the point of their origin, and each of these spatial movements was in search of “greener pastures”.’

There also is a growing need to reinvent the knowledge system of the adivasis as a guide to modern environmentalism. However, the discourse of environmentalism emerges from ‘sustainable development’ and revisits the adivasi society and its conventional wisdom only in utilitarian terms rather than appreciating them as an alternative knowledge system. In a society of abundance and wasteful consumption without egalitarian values this effort seems to be meaningless and anything less than a holistic adoption will hardly serve the purpose of reinventing the adivasi wisdom. The essay by Kumar Suresh Singh interrogates the adaptability of the term ‘indigenous’ beyond the New World and emphasizes the need for self-perception of the tribal as a guide to understand them as a community. The language of FRA is such that it recognizes restricted legal rights of the tribals upon forest rather than forest as customary livelihood resource and its place in their world view. The pertinent question in this context which requires further exploration is that how far the Forest Rights Act, 2006 fulfill the aspirations and needs of the community. On the basis of recent studies conducted on

[1] . Bodhi, S.R. and Raile R. Ziipao (2019) extensively discuss and propose an alternative methodology based upon ‘diversity-dialogue’, knowledge production as contextualization and ‘dialogical historiography’ which ‘recognizes and respects the ability of a living epistemological subject to speak and articulate its own theory of history and its own social reality’ under the rubric of Tribal Intellectual Collective of India (TICI).