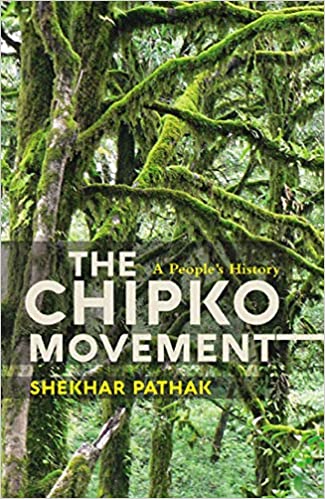 In the year 1974, when the womenfolk and children of village Reni, under the leadership of the gutsy Gaura Devi were chasing away labour contractors and their crony forest officials bent upon felling trees for commercial exploitation, writing perhaps the most glorious chapter in the history of the Chipko Movement, a young scholar named Shekhar Pathak was undertaking with a few others, a foot march from the easternmost fringe of Uttarakhand to its westernmost point. This, without a penny in the pocket, the group’s survival during the arduous trek entirely dependent on offerings from village folk. Having undertaken this difficult journey four more times at an interval of a decade each and his other numerous travels across the Himalayas coupled with a brief incarceration during the movement, have given him an unrivalled understanding of the mountains and the people that inhabit them. No wonder then, Shekhar Pathak catches every nuance of the people’s struggle for their environment and contextualizes events contingent upon it like no other author could have, in his recent work, The Chipko Movement: A People’s History.

No other ecological movement from India has evoked more global interest and emulation than perhaps the Chipko Movement. The journalistic and anthropological literature on the movement is vast, but barring a few exceptions, limits itself either to discrediting the environmental commitment of the movement as mere mythmaking, or indulges in raking up ego clashes between its leaders just to add spice. Needless to say, this has undermined the efforts of Chipko’s foot soldiers, the peasants, students, women and children, who exhibited exemplary leadership in extremely adverse circumstances to protect their forests, relying completely on indigenous wisdom and quite oblivious of the emerging global discourse on ecology.